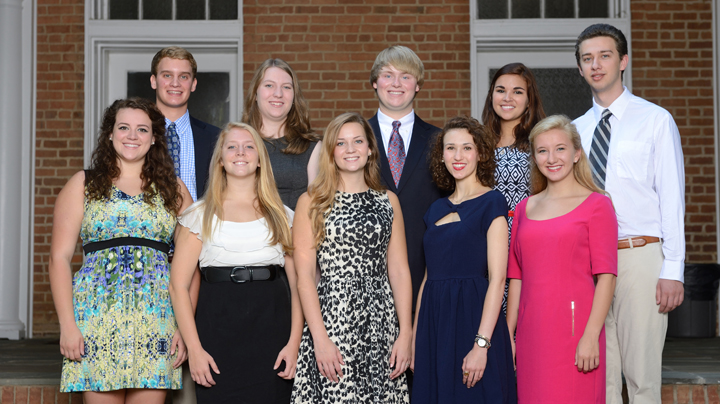 Ten new freshmen with outstanding academic and leadership records and the desire to pursue global careers have entered the University of Mississippi this fall on prestigious Croft Scholarships as members of the Croft Institute for International Studies.

The five students from Mississippi and one each from Colorado, Florida, Illinois, North Carolina and Tennessee receive $8,000 per year for four years. Attesting to their abilities, the 2013-14 Croft Scholars have a mean grade-point average of 3.92 and ACT scores ranging from 30 to 35. They include two National Merit Finalists and a National Merit Commended Scholar.

"The Croft Scholars are an amazingly bright and promising group, and this year's cohort is no exception," said Croft Executive Director Kees Gispen. "Every year I marvel at the depth of talent of the students entering the Croft Institute. This was another banner year – students with the drive and the passion to make a difference in the world, with grades and test scores that rival those at the top universities in the nation."

As members of the Croft Institute, all of the scholars have declared a major in international studies, a demanding interdisciplinary major in the College of Liberal Arts that offers small classes and individual attention. It focuses on the connections between politics, economics, culture and international relations. Requirements include intensive foreign language training and study abroad for at least one semester in a country where the language is spoken.

"Some of the new scholars already are accomplished speakers of Spanish or French; others are taking intensive German and Arabic, as well as Chinese in the Chinese Flagship program, and have tested out of required introductory classes, such as calculus and English," Gispen said. "All of them are potential leaders – young women and men of the caliber needed to face an uncertain future with confidence."

This year's Croft Scholars also are members of the Sally McDonnell Barksdale Honors College, which provides students from all disciplines with a vibrant center of academic excellence to help them become outstanding in their fields and engaged citizens of their communities.

Bobo graduated from Tishomingo County High School with a 4.0 grade-point average and 31 ACT. He was president of the TCHS Student Body and Sign Language Club. A Hugh O'Brian Youth Leadership Ambassador, he was active in community service projects, including Angel Tree and Food Depot. His parents are Amy Bobo and Donnie Bobo.

Cardamone, a National Merit Commended Scholar, was valedictorian at Normal Community High School, graduating with a 4.0 GPA and 32 ACT. She was president of the NCHS Student Body and varsity cheerleader captain. Her community service included volunteering at Advocate BroMenn Medical Center. She is the daughter of John and Susan Cardamone.

Coleman graduated from Biloxi High School with a 4.0 GPA and 30 ACT. She was vice president of the BHS Student Body and president of the National Honor Society. She served as president of the Biloxi Youth Legislature Delegation and African-American Cultural Society. Her community service included mentoring elementary school students, coaching Special Olympics and working with Loaves and Fishes Ministry. Her parents are Ross and Ginger Maxwell.

Cuilik graduated from Gulf Breeze High School with a 4.0 GPA and 31 ACT. She won first place in the Florida Forensic League Regional Competition and was named a Scholar Athlete in track and field. She was a delegate to Model United Nations and member of the Key Club. She was a volunteer at the Pensacola Museum of Art and in other community service activities. She is the daughter of William and Carla Cuilik.

Holeman graduated from Brandon High School with a 4.0 GPA and 31 ACT, and she was inducted into the BHS Hall of Fame. A Mississippi Governor's School Scholar, she was president of the Junior Auxiliary Crown Club. Her community service included work with Relay for Life and Stop Hunger Now. She is the daughter of Shirley Holeman.

Mahoney, a National Merit Commended Scholar, graduated from Cherry Creek High School with a 3.75 GPA and 34 ACT. He won a silver medal on the National Spanish Exam. He served as president of the Men's Community Service Club and participated in such service efforts as Excalibur and Young Life. His parents are Dan and Mary Mahoney.

Martin, a National Merit Finalist, graduated from Madison Central High School with a 3.93 GPA and 35 ACT. She was co-president of the MCHS Student Body, All-American cheerleader, STAR Student and Model UN delegate. Her community service activities included Relay for Life, Salvation Army and Upward Youth. She is the daughter of Dr. Trey Martin and Traci Tigert.

Miller, a National Merit Finalist, graduated from Houston High School with a 3.97 GPA and 34 ACT. An AP Scholar with Honors, she won gold and silver medals on the National Spanish Exam and played varsity soccer. In community service, she volunteered as a Spanish tutor, Race for the Cure, Urban Outreach and Collierville Animal Shelter.

Richmond graduated from Madison Central High School with a 3.67 GPA and 33 ACT. He served as co-president of the MCHS Student Body. He is a UM Chancellor's Leadership Scholar, Mississippi Boys' State Scholar and Herff Jones Scholar. He was a HOBY Ambassador, City of Madison Junior Ambassador, and a delegate to Boys' State and APEX Leadership Summit. His community service included work with Relay for Life and Building Bridges mentoring program. His parents are James and Jennifer Richmond.

Romary graduated from Junius H Rose High School with a 3.85 GPA and 31 ACT. She was named Distinguished Young Woman of Pitt County and was a delegate to North Carolina Governor's School. In community service, she volunteered for the Children's Miracle Network, Charity Denim and more. She is the daughter of Peter and Marcia Romary.

For more information about the Croft Institute, visit http://www.croft.olemiss.edu/home/.