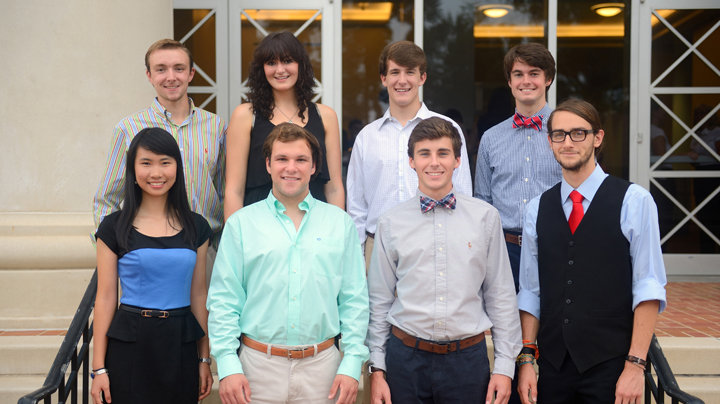 Ten recent high school graduates with exceptional academic records and proven leadership ability have been awarded $32,000 scholarships as freshman members of the Sally McDonnell Barksdale Honors College at the University of Mississippi.

Four of the students received McDonnell Barksdale Scholarships and six were awarded Doris Raymond Scholarships, which provide $8,000 per year for four years. Six of them hail from Mississippi, two from Tennessee and one each from Alabama and Oklahoma.

All the scholars posted ACT scores of 30 or higher, three are National Merit Finalists and seven finished high school with a 4.0 grade-point average.

"These scholars continue to set a high bar for both faculty and staff," Honors College Dean Douglass Sullivan-González said. "We love their inquisitiveness and their engaging demeanor. We are proud to welcome these Barksdale and Raymond scholars to campus."

During their freshman year, the scholars enroll in the Honors College's interdisciplinary courses, which expose them to critical thinking in the arts, sciences and humanities. They also take honors sections of courses across disciplines to fulfill hours in their majors or to meet general academic requirements. As early as their freshman year, they have opportunities to begin research, which leads to their senior honors thesis.

Like most of the scholars, Zhang expressed excitement and gratitude for having been chosen to receive one of the awards.

"When I got the phone call about being awarded the McDonnell Barksdale Scholarship, I almost stuttered in my excitement," she said. "The scholarship meant full tuition, full confidence and full expectation. I am honored that the Honors College is willing to invest so much of its financial resources in me, and I hope to meet and exceed their expectation in the next four years."

Brahan said, "I am thrilled to be a McDonnell Barksdale Scholar; I will strive each day to meet the expectations that come with this scholarship. I am honored to have been chosen for this award."

Brahan graduated from Presbyterian Christian School with a 4.0 GPA and 30 ACT. Recipient of the PCS Marissa McGill Christian Leadership Award, he was president of the student body, Boys State governor and Boys Nation senator. He was a National Forensics League All American and national qualifier, and district champion in Public Forum Debate. He was a member of the PCS cross-country state championship team. He won first place in special talent at the state Beta convention and was district champion and state runner-up in Poetry Out Loud competition. His volunteer efforts included work with Stop Hunger Now, local food pantry, tutoring and service in nursing homes. He is interested in studying government, law and philosophy.

Burrow, a National Merit Finalist, graduated from Jackson Preparatory School with a 4.0 GPA and 33 ACT. He is an Eagle Scout and recipient of his school's Distinguished Service Award and the Silver Community Service Award. An AP Scholar, he earned a gold medal and two silver medals on the National Spanish Exam. For two years each in high school, he was a member of the JPS state championship teams in football, basketball and swimming. His volunteer work included a summer sports ministries mission trip to Guatemala and a summer medical mission trip to Peru. He plans to study history and computer technology, with an emphasis in pre-med.

Durham graduated first in his class of 53 at Magnolia Heights School in Senatobia with a 4.0 GPA and 34 ACT. He participated in the Rural Medical Scholars Program and completed seven RMS college hours, earning a 4.0 GPA. He was a district winner in Academic Betterment Competition and recipient of the Daughters of the American Revolution History Award. He served as president of both the junior high and high school MHA Student Government Association and was a member of the school's varsity basketball and golf teams. In community service, he worked on a building project at the local Sycamore Park and as an instructor at youth basketball camp. He plans to study business and law.

Farmer graduated first in her class of 480 at Tupelo High School with a 4.0 GPA and 34 ACT. She served on the THS Student Council and was captain of the school's volleyball and archery teams. She won her school's Outstanding Junior Award and Archery Award, and the Gum Tree Judges Choice Art Award. She was a three-year Rotary Scholar and two-year ACT Scholar. As a volunteer, she worked with Habitat for Humanity, Helping Hands and Vacation Bible School, among other efforts. Her academic interests include business, education and nursing.

Lynam graduated from Bearden High School in Knoxville with a 3.79 GPA and 31 ACT. He received Stellar Scholar designation at BHS, which recognizes students who rank academically in the top 5 percent of the student body. An AP Scholar and member of his school's mock trial team, he was runner-up lead attorney in East Tennessee regional mock trial competition. He was recognized by Hangzuo Normal University in Hangzuo, China, for completion of Chinese culture courses. His community service included leading the Fantasy of Trees fundraiser and a camp for children with cancer for the East Tennessee Children's Hospital. He plans to study Chinese.

Markos graduated from University School of Jackson with a 32 ACT and 4.0 GPA. He was a Tennessee delegate to the U.S. Senate Youth Program and was voted class speaker of the Jackson Chamber of Commerce's Leadership University. He won first place in team competition in the Minority Introduction to Engineering Systems program at the University of Texas at Austin and the Male Engineering Award in the High School Introduction to Engineering Systems program at the University of Tennessee. He received the 2012 Sewanee Award for Excellence in Writing, and he finished in the top five in the region in the Tennessee Mathematics Teachers Association's state math contest. At USJ, he was a member of the 2009 state champion tennis team and a three-year member of the concert choir. His numerous volunteer efforts include work with the Carl Perkins Center for Child Abuse and Boys' and Girls' Club of Jackson. He plans to study the biological sciences, public policy leadership and Spanish.

Moore graduated from FAME Public Charter School with a 3.96 GPA and 33 ACT. She received her school's President's Award for Academic Excellence and was recognized for academic excellence in Spanish, world history, writing composition and geometry. A member of the National Society of Academic Scholars, she was a volunteer at the El Sobrante Public Library. She is interested in studying chemistry, geology and mathematics.

Moorman, a National Merit Finalist, graduated from Madison Central High School with a 4.0 GPA and 32 ACT. He ranked eighth in his class of 377. A member of the National Honor Society, he received the MCHS Citizenship Award and Beta Club's Servant's Spirit Award. He was named outstanding representative of the YMCA Mississippi Youth Legislature, and at Mississippi Boys' State, he was elected senator and nominated for Boys' Nation. He was a member of his school's Symphonic Band and Madrigal Singers, and the State Honor Choir. His community service included work with Teen Pregnancy Awareness Conference, Hope Hollow special needs camp and His Heart ministries. His academic interests include international studies and physics.

Sowers graduated from Prattville High School, second in his class of 516, with a 3.95 GPA and 34 ACT. He was president of the PHS Student Body and recipient of the Spirit of the Lions Award. He was a three-time qualifier for the National Forensics League, and he received academic awards in social studies and tennis. He volunteered as a tennis coach and in service projects with the PHS Student Council. His academic interests range from biomechanical engineering to investment banking and pre-med.

Zhang, a National Merit Finalist, graduated from Oxford High School. She ranked fourth in her class of 224, with a 4.0 GPA and 35 ACT. She was a Mississippi Star Student and AP Scholar with Distinction. She was the Mississippi Envirothon state champion, and placed first in soils/land use in the North American Envirothon. She served on the OHS Student Council and was a member of the Math and Science Team. He won second place in math at the Mississippi College Math and Science Tournament and third in behavioral science at the Mississippi Science Fair. She was a third-place winner in individual fiction at the Regional Reading Fair. In community service, her work included tutoring high school students and helping with More Than a Meal and Christmas Store. She is interested in studying pharmacy, biochemistry and medicine.