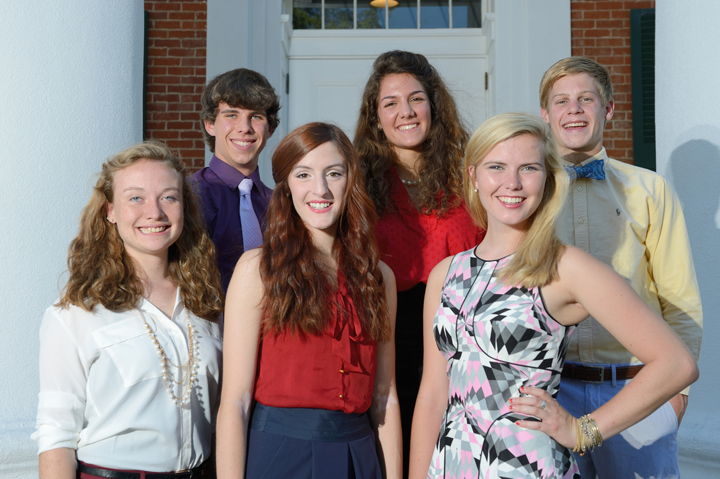 Six freshmen have the distinction of being the first University of Mississippi students to benefit from one of the nation's top scholarship programs, thanks to Ole Miss' new partnership with the Stamps Family Charitable Foundation.

Valued between $98,000 and $138,000 each, the Penelope W. and E. Roe Stamps IV Leadership Scholarships at Ole Miss become the most comprehensive, full scholarship packages for in-state and out-of-state students. Each package covers the full cost of attendance, along with a $12,000 stipend for unique educational pursuits, including study abroad, research internships and academic conferences.

After need-based aid and other scholarships are credited to the students' accounts, the balance of the scholarship package will be assigned equally to Ole Miss' and the Stamps Foundation's budgets.

The Stamps Scholars posted ACT scores from 33 to a perfect 36 and grade-point averages from 3.8 to 4.0, each with other outstanding academic achievements, as well as impressive records in leadership and service.

"These six freshmen are among the most gifted students in the country, and each of them had many options for next steps in their education," UM Chancellor Dan Jones said. "I have no doubt they will have a profound impact on our community as Ole Miss students. I look forward to following each of them through their educational careers and can't wait to see how they make a difference in our world as future leaders."

The scholars echoed sentiments of gratefulness for the Stamps' generosity and excitement at being chosen for the award.

"I am forever grateful to Mr. and Mrs. Stamps for believing in me," Achgill said. "It's great knowing I won't be a financial burden to my family and I can graduate debt-free. I feel that the Stamps Scholarship has opened so many doors for me. I can now feel free to explore more of the opportunities the world has to offer. I'm already looking into research and service projects I can do over the next four years."

Ritter said he was "completely stunned" at being named a Stamps Scholar.

"I never expected I would be going to a school like Ole Miss with this kind of financial support," he said. "Not only is the tuition assistance helpful, but the enrichment fund will open doors to new opportunities that only a few months ago seemed out of reach."

Prendergast said, "It is thrilling to know that Mr. and Mrs. Stamps and the university fully support my dreams to truly serve society. This scholarship provides the opportunity to enrich oneself in learning, service and research experiences, creating a personalized education to become an exceptional member of society who can truly make a difference."

The Stamps Scholars' first group pursuit came at the end of summer vacation when they gathered for a seven-day Outward Bound backpacking adventure in Maine. The primary goal of the experience is for the college freshmen to begin building strong bonds and developing skills to become effective leaders, which is a key component of the Stamps Leadership Scholars Program.

"Each day of hiking on the course challenged the group physically, mentally and emotionally," Prendergast said. "After a day-and-a-half of training, we were encouraged to function as a team independent from our instructors, forcing us to bond, refine our leadership skills and grow as a team."

The inaugural scholars are now on campus enjoying many other opportunities, thanks to the partnership with the Stamps Foundation that first began last fall.

"Penny and Roe Stamps are generously providing deserving young people lifelong inheritances by funding these incredible educational opportunities," Jones said. "Their support enhances our tools to recruit exceptional students. We are extremely fortunate to have the University of Mississippi associated with these tremendous scholarships."

As founders of the Stamps Family Charitable Foundation, the couple began the Stamps Scholars program at their alma maters of the Georgia Institute of Technology and the University of Michigan. The generous philanthropists have funded scholarships for hundreds of students across the nation but had no previous affiliation with Ole Miss. UM alumnus William Dunlap of McLean, Va., brought his alma mater to the family's attention, and after reviewing a proposal from the university, the Stamps chose Ole Miss as their latest partner.

With affirmation of the partnership, UM has created the Chancellor's Scholarship Program of elite awards, which will include the Stamps Leadership Scholarships as well as the university's longtime top academic awards of Newman and Carrier scholarships.

UM's inaugural cohort of Stamps Scholars are setting the pace for students who dream of following in their footsteps.

Achgill, a National Merit Commended Scholar and AP Scholar with Distinction, graduated from Armand Hammer United World College. She spent a year as an exchange student in Quito, Ecuador. She received a National Security Language Initiative for Youth Scholarship in 2012 to study in China and a StarTalk Scholarship in 2011 to study Chinese. Her service activities included work at the Indianapolis Public Library and Community North Hospital, as well as with English Language Partners and HIV/AIDS Peer Educators.

Branson, a National Merit Scholar, graduated from Madison Central High School, where he posted highest-grade averages in various subjects throughout four years. He won first place in trigonometry at the State Math Convention and was chosen Youth Legislature's Most Outstanding Statesman. He won the MCHS Citizenship Award and was a Hugh O'Brian Youth Leadership, or HOBY, Ambassador. He volunteered with Habitat for Humanity and Canned Food Drive, and served Madison as the City Junior Ambassador.

James, a National Merit Scholar and AP Scholar with Distinction, graduated from Mandeville High School. She won first place in civics at the State Literary Rally, and she was a HOBY 2011 Ambassador and her state's ambassador to HOBY 2011 World Leadership Congress. She attended the YMCA Youth Conference on National Affairs and was a summer scholar at UM's Lott Leadership Institute. Recipient of the President's Volunteer Service Award, she worked with the Student Tutoring Service, Youth and Government State Board, Habitat for Humanity and Samaritan Center Food Drive, among other volunteer efforts.

Prendergast graduated from Hahnville High School. She participated in Pace University Summer Scholars Institute and was a state senator at Girls State. A first-place winner in Team Math Challenge at Nicholls State University, she rated superior in drama and excellent in Spanish interpretive reading at Louisiana State University. She won first in fiction and second in nonfiction in the Louisiana Writing Project, and third in her district science fair. She was a volunteer with a physical therapy clinic, Wing and a Prayer Productions, Concerned Care Hospice and Dance Medicine for Injury Prevention.

Ritter graduated from Rutgers Preparatory School. During summer 2011, he worked in Ireland for five weeks at a pharmaceutical lab, where his performance earned the opportunity to perform independent research for the multinational company. He was captain of the RPS varsity golf team during his junior and senior years. In service work, he co-founded Tend to a Friend charity and was an Aftercare volunteer. He was a three-year recipient of his school's Community Service Award.

Tyner graduated from Oxford High School, where she was president of the student body. She represented OHS at the Edinburgh (Scotland) Festival Fringe, a showcase for the performing arts. She won second place in the Southern Interscholastic Press Association's talent show. Associate editor and design editor of the OHS yearbook, she received a superior rating in layout and design at the Mississippi Scholastic Press Association. In science fair competition, she placed first in the region and second in the district. Her service projects included a Cherokee mission trip and work with the Oxford Food Pantry and Operation Christmas Child.

Those individuals and organizations interested in supporting Chancellor's Scholarship Program can contact Carol Anne Miconi at camiconi@olemiss.edu or 662-915-1758.