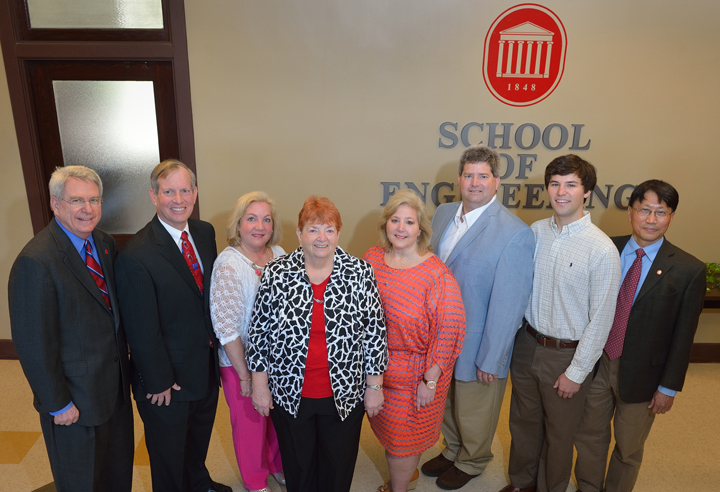 Throughout his life, Buzzie Seely of Moss Point, Miss. perfected a great number of skills, from navigating for the Air Force to refinishing furniture for a family business. But when it came to his beloved profession, his wife, Gail, offers her opinion: "God makes engineers."

The Seely family has provided a $140,000 gift to create the Warren B. "Buzzie" Seely Memorial Endowment, funding chemical engineering scholarships for the University of Mississippi School of Engineering. "This gift is from the whole family," Gail explains. "It is our children's endowment for their daddy."

Together with her late husband, Gail has provided support to UM and the School of Engineering for many years. The Seelys established the Catherine Ann Seely Memorial Scholarship in 1984, awarded each year to an incoming freshman from Jackson County in remembrance of their daughter, Cathy.

Upon earning his chemical engineering degree from UM in 1955, Buzzie, a member of ROTC, was commissioned as a Second Lt. in the United States Air Force. Though he was an accomplished navigator and electronic countermeasures officer, Buzzie was anxious to return home and get started as a chemical engineer.

Buzzie did just that: he began his long and distinguished career first with International Paper, and soon after with Rohm and Haas Chemical Company in Moss Point, where he remained for the next 47 years. "Buzzie always wanted to be a chemical engineer," Gail remembers. "He was extremely curious. If something broke, no matter what it was, he would hang on to it and tear it apart to see why it didn't work, and fix it if he could."

"Buzzie Seely set an outstanding example for hardworking young men and women who wish to follow in his footsteps," remarks School of Engineering Dean Alex Cheng. "That example will be continued through this endowment honoring his life, which will help future chemical engineers complete their educations."

Gail met her late husband when they both attended the University of Mississippi. Three of their children, Buddy, Karen, and Christi, received degrees from Ole Miss, and their three grandchildren have continued the legacy as well. "We're a big Ole Miss family," she says, noting that her parents, too, met on campus.  "There are a lot of wonderful memories here."

"Clearly, the Seely family loves Ole Miss and has generously demonstrated this over the years by providing opportunities for others to be educated here as well," said Kevin Gardner, UM development officer for engineering. "We are grateful for their ardent support, once again, making the University of Mississippi a reality for those wishing to attend and honoring Mr. Seely's legacy."

When it comes to those future chemical engineers, Gail hopes that they will love their profession as much as Buzzie did. "I hope they are as dedicated as he was – that it becomes a part of them," she says with a smile, remembering her husband. "Who else would consider a chemical engineering magazines and textbooks bedtime reading?"

The Warren B. "Buzzie" Seely Memorial Endowment is open to receive other gifts. Individuals and organizations that would like to contribute can send a check with the fund noted in the memo line to: The University of Mississippi Foundation, 406 University Avenue, Oxford, MS 38655; contact Kevin Gardner, development officer for engineering, at kevin@olemiss.edu or 662-915-7601; or, visit online at www.umfoundation.com/makeagift.