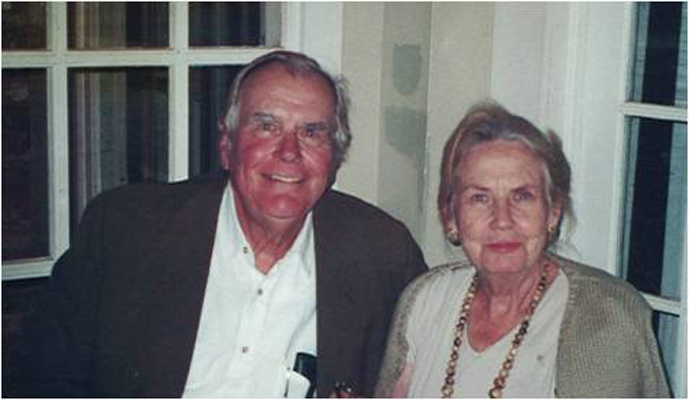 The late Frank Peddle is pictured with his wife Marjorie, who has made a new gift to the University of Mississippi Museum to reinstall the Robinson Collection, a 2,000-piece collection of Greek and Roman antiquities.

The University of Mississippi Museum's 2,000-piece David M. Robinson Collection of Greek and Roman antiquities objects — the largest collection of antiquities held by a university museum in the South — stands out for its significance, with international scholars studying the exquisite black-and-red figured Athenian vases, Roman sculptures, coins, tablets, lamps and architectural fragments.

Thanks to the generosity of Marjorie Peddle of Oxford, Miss., new gallery spaces are being prepared to increase physical and intellectual access to the collection. The major donor and her husband, the late Frank Peddle, purchased part of the collection for the University Museum in 1960. Marjorie Peddle now has provided a $150,000 gift for the exhibition to be expanded and the audience experience enriched with display and technology enhancements.

While parts of the collection's pieces from 1500 BCE to 300 AD have been displayed for decades at the University Museum, now more of the vast collection will be seen on a rotating basis once the 18-month project is complete. Four gallery spaces of the Mary Buie Museum, part of the museum complex, are being designed to house the collection by consultant Alchemy Studio in Maplewood, N.J.

"We are profoundly grateful to Mrs. Peddle for such an extraordinary and gracious gift," said museum director Robert Saarnio. "Originally we thought this reinstallation project would have to be carried out in phases as funds became available, but now the project can be completed with no interruptions. To honor this incredible generosity, the renovated central gallery with the reinstalled Robinson Collection will be named the Marjorie W. and Frank S. Peddle, Jr. Gallery. Major celebrations and a scholarly symposium will accompany the re-opening.

Much of the Greek and Roman antiquities came to the university from the personal collection of Professor David M. Robinson, a world-renowned archeologist and teacher. Retired from Johns Hopkins University, he joined the Ole Miss faculty in 1949. He continued to augment the collection, which became one of the greatest private collections of antiquities in this country. Upon his death in 1958, Robinson bequeathed his Roman sculptures to UM while the rest of his collection was divided between his widow, the late Helen Tudor Robinson, and Harvard University.

Helen Robinson made several generous gifts and bequests to UM and, after her death in 1960, the remainder of her share of the collection was purchased and presented to the university by the Peddles. At their request, all the antiquities are identified as the David M. Robinson Memorial Collection.

"It's difficult to adequately describe the significance of this breathtaking collection and how important it is to share it with the world," Saarnio said. "The University of Georgia, for example, built a whole course around one of the marble friezes in the collection, with fascinating scholarship outcomes."

"Daddy understood the value of the collection and how special it was. He did not want the collection to go to another university. He appreciated art and had grown up in a part of the country where he was exposed to a lot of different museums. I'm so proud this gallery will be named for my parents because it reflects the unselfish gift they provided many years ago as well as this last gift to display the collection properly. "

Included in the Robinson Collection are potsherds dating from the Neolithic Age to the late Roman Empire. Robinson also bequeathed to the university his extensive collection of books and papers, most of which are housed in the J.D. Williams Library. Robinson's excavation notes and records from his famous exploration of Olynthus are maintained in the University Museum. Multiple images of 48 of the Robinson vases can be viewed in the Perseus Digital Library's Art and Archaeology collection (www.perseus.tufts.edu).

Frank Peddle first came to Ole Miss in 1947 to enroll in the first Navy Reserve Officers Class and earned an undergraduate degree in physics and a graduate degree in education. The Peddles met in 1949 and were married in 1951. After Frank's military service, they returned to Oxford. "They had a feeling that Oxford was where home was going to be. They had both grown to love Oxford and Ole Miss so much. Growing up in Oxford, my family and I were involved with everything at Ole Miss," Sale continued.

Words used to describe Frank Peddle include "visionary" and "pioneer," said Sale, who is also an Ole Miss graduate, along with her sister, Virginia Peddle Pace of Germantown, Tenn. "He built a computer before there were personal computers and later opened the first computer company in Oxford. He designed our family home "The Oaks" in Oxford and later "Little Oaks," a vacation home in Florida and worked with wood and anything electronic. He taught and conducted research in the School of Education. Learning was important to him, seeking answers to why and how things worked."

Among the great loves of the Peddle family were its annual Christmas lights, which was an Oxford tradition for 50 years. Sixty trees in the Peddles' yard were decorated, and Frank stripped the paint off each light and mixed special colors to repaint the bulbs each year. The late artist Theora Hamblett chose the holiday light display as a subject, and the painting is now housed in the University Museum.

Among other things, the Peddle family was dedicated to music, with Frank playing piano by ear. While serving on the Paris-Yates Chapel Committee at Ole Miss, Marjorie became interested in seeing a bell tower constructed. The couple contributed the funds for the Peddle Bell Tower, which features 36 stunning bronze bells and a clock. Its carillon provides a daily selection of songs at 5 p.m. In addition, the Peddles have supported numerous other university programs.

For more information on providing support to the University Museum, contact Angela Barlow, development officer, at 662-915-3181 or ambarlow@olemiss.edu.