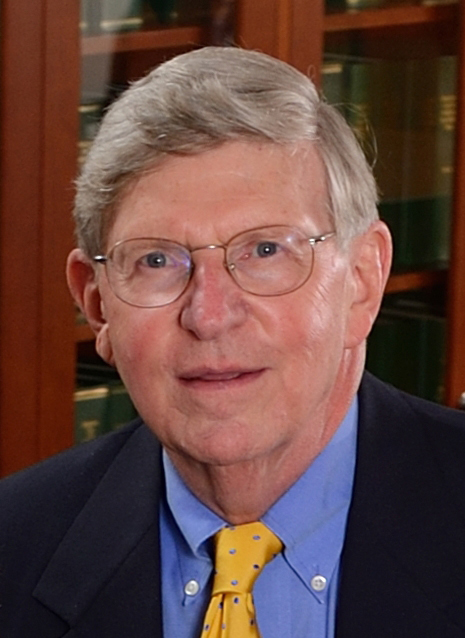 John Robin Bradley's career at the UM School of Law has impacted and shaped the reputation it maintains across Mississippi and the nation today.

Generations of attorneys, judges, teachers and statesmen have been impacted by Professor John Robin Bradley's 47 years of teaching contracts, corporations and workers' compensation at the University of Mississippi School of Law. While his enduring service leaves a lasting legacy, so too will his gifts exceeding $100,000 to establish the Medgar Evers Scholarship in Law, assuring that future Mississippi leaders in justice will find more open doors than their predecessor, Medgar Evers.

Remembered nationally as one of the most prominent civil rights workers of his time, Evers, a native of Decatur, Miss., applied to the UM School of Law in 1954 but was rejected by the then-segregated school. His initiative and work promoted him to state field secretary for the National Association for the Advancement of Colored People (NAACP), providing a chance to assist James Meredith with enrollment at UM in 1962.

On June 12, 1963, Evers was shot and killed at his Jackson home at the young age of 37. Commemorated across the country, this year marks the 50th anniversary of Evers' assassination. In honor of his legacy, Evers' widow and civil rights leader Myrlie Evers-Williams was chosen as commencement speaker at UM's May graduation ceremonies.

In addition to his respect for Evers, Bradley was inspired to build the scholarship endowment to reflect a longtime dedication to opening doors for African Americans to pursue law degrees. When Bradley joined the School of Law faculty in 1966, then-law dean Joshua Marion Morse III had acquired a grant from the Ford Foundation for minority scholarships and was recruiting and admitting African-American students.

"We were recruiting high-caliber African-American students and were among the first law schools nationally to do so, aside from the historically black colleges. I had grown up in Mississippi and it was so obvious to me the importance of providing quality education to all people, regardless of race. Lawyers often become leaders among their communities, and I knew it was important that black Mississippians could attend law school. Dean Morse and others had helped put the law school in the vanguard of social change in the state of Mississippi."

Bradley helped forge the constitution of the law school and recruited many members of the faculty, including some who have gone on to become a federal judge, president of a state university, dean of a law school and several other distinguished practitioners and faculty, including Mike Hoffheimer, Mississippi Defense Lawyers Association Distinguished Lecturer and UM professor of law, in 1987.

"There is no one who has been more significant in the history of this law school," said Hoffheimer. "First, Professor Bradley helped in opening and keeping open the doors of this law school to African-American students and faculty as well as other minorities. He has done this through thick and thin, including times when it was not popular to do so. He has also been at the forefront in insisting that the law school achieve and maintain the highest standards of academic excellence and that too has also been challenged over time for various reasons, and for that we are eternally grateful."

To commemorate Bradley's legacy, the UM School of Law established the John Robin Bradley Award for the Outstanding Graduate and the John Robin Bradley Lectureship for Excellence in First-Year Teaching. At a reception honoring his retirement, law faculty adopted a proclamation recognizing Bradley's lifetime achievements. Among the many accomplishments recognized were his two terms as president of the UM Faculty Senate, historic contributions to improving quality and diversity at the law school, significant contributions in scholarship regarding workers' compensation, and the inspiration he provided students and colleagues to aspire to the highest moral and academic levels.

"John Robin Bradley has been an enduring pillar connecting multiple generations of Ole Miss law students from 1966 to 2013," said David Case, UM associate professor of law. "For the last several years, he has been the longest-serving active faculty member at the University of Mississippi. His retirement is truly the end of an era."

Bradley said he hopes alumni, friends and others will share his fortitude by contributing to the Medgar Evers Scholarship Endowment to honor leaders of social justice in law and education. "We have the Eastland Scholarship and other lead scholarship endowments that are critical for the law school. I'd like to see others contribute and help the Medgar Evers Endowment reach that same level, as nowadays, other schools are offering substantial scholarships to recruit the best students. We really need these scholarship funds to remain successful.

"Institutionally we have to be aware of the narrative of our school and be steadfast in trying to welcome, recruit and offer the highest quality education to all students, especially minority students. Our alumni are often the first people that prospective students contact, so we must be diligent in overcoming any existing perceptions that are in opposition to this."

The professor's work is also a testament to his dedication to his home state. He grew up in Inverness and graduated from the local high school in 1955 before attending Mississippi College, where he played varsity tennis and was elected class president, campus favorite and senior most likely to succeed. He graduated with a major in history and minors in English, German and sociology. There he met Laura Lipsey, whom he would eventually marry and share two children, Mark and Claire.

Bradley served as editor-in-chief of the Mississippi Law Journal and earned a Juris Doctorate with distinction in 1962 from UM. Though offered an immediate faculty position with the law school, he recognized the value of practicing before teaching and joined Wise, Smith and Carter as an associate. After a year with the Jackson firm, Bradley went to work as a corporate in-house lawyer for the Mississippi Chemical Corporation in Yazoo City for more than two years before coming back to be a part of the UM faculty.

The Medgar Evers Scholarship in Law Endowment is open to receive gifts from individuals and organizations. Those interested can mail a check with the fund noted to the University of Mississippi Foundation, 406 University Avenue, Oxford, MS 38655; contact Jamie White, development officer for the UM School of Law, at 662-915-6881 or email jamie@olemiss.edu; or visit www.umfoundation.com/makeagift.