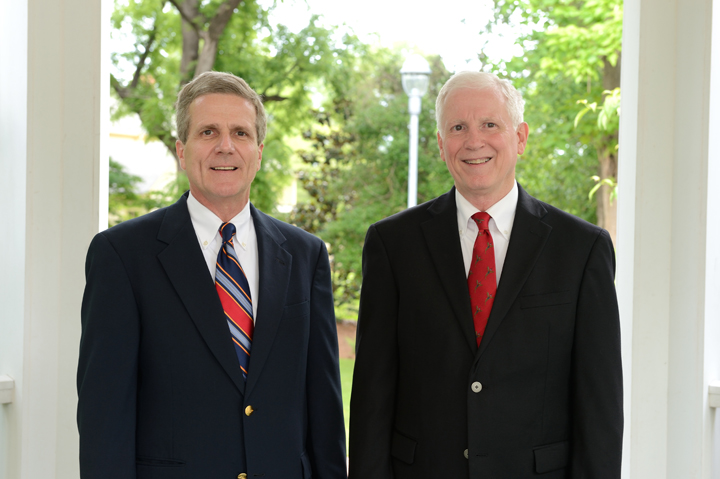 Brothers Tom, left, and Walton Gresham of Indianola have established the William W. Gresham, Jr. Entrepreneurial Lectureship in memory of their father. The fund - the first major gift in the UM School of Business Administration's new entrepreneurship program - will be used to recruit outstanding faculty members to lead the program.

University of Mississippi alumnus William Walton "Bill" Gresham Jr. would be honored to know that his road to success as a businessman is helping to pave the way for countless future entrepreneurs.

"Our Dad was an entrepreneur and he believed that small business was the backbone of America," said Tom Gresham, president of Double Quick, Inc. of Indianola.

Gresham and his brother Walton, president of Gresham Petroleum Co., have established the William W. Gresham, Jr. Entrepreneurial Lectureship in memory of their father. The fund – the first major gift in the UM School of Business Administration's new entrepreneurship program – will be used to recruit outstanding faculty members to lead the program.

The Entrepreneurial Lectureship was created to give Ole Miss students the educational foundation on which they can build new businesses and innovate in existing ones, ultimately providing more jobs for Mississippi and the region. The business school began offering a minor in entrepreneurship in 2011 and plans to expand offerings to include an entrepreneurship major in the near future.

"The Gresham Lectureship helps us retain and attract great faculty members who are the cornerstone of the program. Without the proper expertise and experience, we would be less able to give our students the edge they need to create successful businesses in the future. It is through faculty support that we leverage the skills of our professors to have an impact on hundreds of students each year," said Business Dean Ken Cyree. "We are very grateful to the Greshams for their generosity and will use these funds to have a lasting impact on a large number of students for generations to come."

Family members recall Bill Gresham's belief that anyone attending Ole Miss could build meaningful careers and lives, and his own experiences stood as a testament to that line of thought. The 1948 liberal arts graduate began his career with Gresham Petroleum and continued his success as a family partner in several petroleum-related businesses including an extensive chain of convenience stores.

UM Chancellor Dan Jones said, "We are deeply grateful for the late Bill Gresham's tremendous devotion to this university. We thank his sons, Tom and Walton, for expanding his legacy with this thoughtful gift to develop promising entrepreneurs. There is such an array of innovation and talent among our student body and faculty that it will be inspiring to witness the fruits of the Greshams' investment in this new initiative."

Gresham and his wife, Ann, whom he met through a mutual friend while in the student grill at Ole Miss, have been major donors to the university, supporting the George P. Hopkins Engineering Scholarship Endowment (established in memory of Ann's father), The Gresham-Duncan Scholarship (established in memory of Bill's grandmother), Pride of the South Band, Ole Miss Athletics, and an array of other campus initiatives. Bill Gresham served on the Ole Miss Alumni Association Board in the early 1980s, was named to the Alumni Hall of Fame, and in 2002, he served on the Sesquicentennial Committee and Campaign for Athletics.

Tom and Walton Gresham have followed in their father's footsteps, both in business and in their philosophy of giving.

"Our father and grandfather always believed in giving back to the community," said Walton Gresham, who earned a business degree from Ole Miss. "They both stressed the importance of supporting our community, our alma maters and the state of Mississippi."

Among their gifts to the university, Gresham and his wife, Laura – who received a UM degree in education – have supported Ole Miss Athletics, the H.E. Peery Endowed Scholarship in Accountancy, Pride of the South Band and the Alumni House renovation. Similarly, Tom Gresham, a graduate of Southern Methodist University, and his wife, Louise, a graduate of the University of Texas, have helped support Ole Miss Athletics, the Grove Society and the Pride of the South Band.

But their gift to the Entrepreneurial Program has perhaps the most sentimental value.

"We wanted to do something to honor the memory of our dad. He always had an entrepreneurial spirit, having worked in the family business since graduating from Ole Miss," Tom Gresham said. "Dad encouraged us to grow our businesses and he even signed the bank note with our uncle when we were starting Double Quick in the early 1980s."

"He believed that the entrepreneurial spirit in America is what makes the United States the greatest capitalistic country in the world. He believed that the future of Mississippi depended on individuals with great ideas starting new businesses," added Walton Gresham.

The UM business dean points to the fact that the state is ranked relatively high in entrepreneurial activity and in the proportion of small and family-owned businesses.

"We want to enhance our advantage in that area and leverage our impact with the Mississippi Small Business Development Center and Insight Park here on campus so Ole Miss can be a leader in helping create and expand businesses in the state and region," he said.

"This program provides a bridge between academic education and real-world application," Cyree explained. "We have several ways for students to get hands-on experience, including the Gillespie Business Plan Competition where students compete for cash prizes on their ideas and presentation to outside business leaders. We will soon have an entrepreneur-in-residence who can further add value to our students by mentoring them and providing experiential learning to help students put academic concepts into practice."

Bill Gresham, who passed away in early 2010, would be excited by the program's promise for his native state, his family says.

"Our Dad was an entrepreneur investing in several new businesses that are successful today. If Mississippi is going to continue to grow, we need people willing to take the risk of starting a new business in Mississippi," Tom Gresham said. "We hope that this gift will encourage people to stay in Mississippi and make an investment in our state through starting their own business."

Walton Gresham agreed, saying, "This gift will help Ole Miss attract and teach students interested in starting and growing their own businesses, giving them an opportunity to succeed. Hopefully, these students will choose to build their businesses in Mississippi, making it a better place to live."

The William W. Gresham, Jr. Entrepreneurial Lectureship is open to receive other gifts. Individuals and organizations that would like to contribute can send a check with the fund noted in the memo line to The University of Mississippi Foundation, 406 University Avenue, Oxford, MS 38655; contact Adam Lee at awlee@olemiss.edu, 662-915-1586; or visit online at www.umfoundation.com/makeagift.