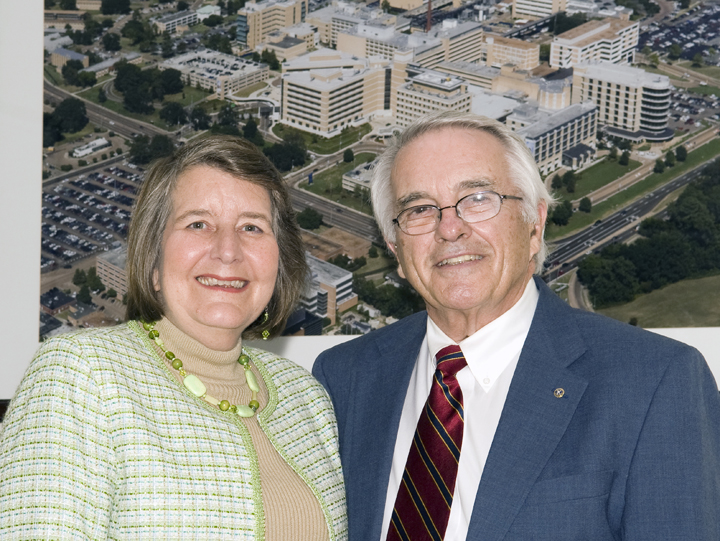 During a University of Mississippi Medical Center luncheon in his honor, Dr. Edwin Flournoy and his wife Beth were presented with a magnolia-themed vase created by Mississippi artist Margie Solomon. A $250,000 gift bearing Flournoy's name has established an endowed fund for the UMMC Department of Family Medicine, where the physician graduated from the School of Medicine in 1960.

Dr. Edwin Flournoy forged his professional reputation in Georgia, but, thanks to a recent donation, his name will live on in his home state of Mississippi as well.

A $250,000 gift in his name has established an endowed fund for the Department of Family Medicine at University of Mississippi Medical Center (UMMC), where Flournoy graduated from the School of Medicine in 1960.

A longtime resident of Albany, Ga., Flournoy serves on the board of the donor organization: the Georgia Academy of Family Physicians (GAFP) Educational Foundation, which had never provided a grant outside its home state before.

"This was a special situation," said Robin Eubanks, executive director of the Atlanta-based foundation.

"When we decided to give endowments in honor of our board members, Dr. Flournoy said he wanted his to go there in Jackson, where he was raised, went to elementary school, high school, college and medical school."

The Edwin E. Flournoy, M.D. Endowed Family Medicine Fund for Faculty Development can be used to fund, among other things, workshops, training sessions, retreats and the recruitment of visiting professors or other experts to teach faculty members.

"I'm very happy I can do this in Mississippi," Flournoy said during a recent luncheon at UMMC. "I very much honor the education I received here."

The fund will grow and endure as it accepts more gifts, which are fully tax-deductible when made through the University of Mississippi Foundation. Endowed funds are held permanently, with the annual income directed to the designated area.

"We are thrilled to honor a graduate who has been a forefather in establishing family medicine residencies," said Dr. Diane Beebe, chair of the Department of Family Medicine.

"Faculty members who come to residency programs were trained as doctors, not as teachers; so faculty development is never-ending and needs a lot of support.

"Its importance in accreditation is stronger than ever. To be able to support it in perpetuity is really a gift," she said.

Flournoy's personal connection to UMMC is broad and deep. His wife Beth, a Meridian native, had their first child at UMMC in Jackson, the city where they met as students at Millsaps College.

Flournoy ended up in Georgia because of his military commitment to the U.S. Air Force, which eventually landed him in Albany, in a poor, rural area of the state lacking physicians. He practiced there from 1965 until his retirement in 2007.

"Dr. Flournoy was instrumental in starting the family medicine program in Albany, helping populate southwest Georgia with family physicians," Beebe said. "That is no small accomplishment."

Flournoy was one of five physicians who established the GAFP Educational Foundation, now a grant-giving institution.

"It has quite a legacy of supporting education," Beebe said.

Although he has retired, Flournoy continues to work part-time at a Veterans Administration clinic in Albany.

"It gives me a warm feeling to still be able to practice the art of medicine today," he said.

The Edwin E. Flournoy, M.D. Endowed Family Medicine Fund for Faculty Development is open to accept gifts from individuals and organizations. Those interested in contributing can send a check with the fund's name written in the memo line to the University of Mississippi Foundation, 406 University Avenue, Oxford, MS 38655; or visit online www.umfoundation.com/makeagift.