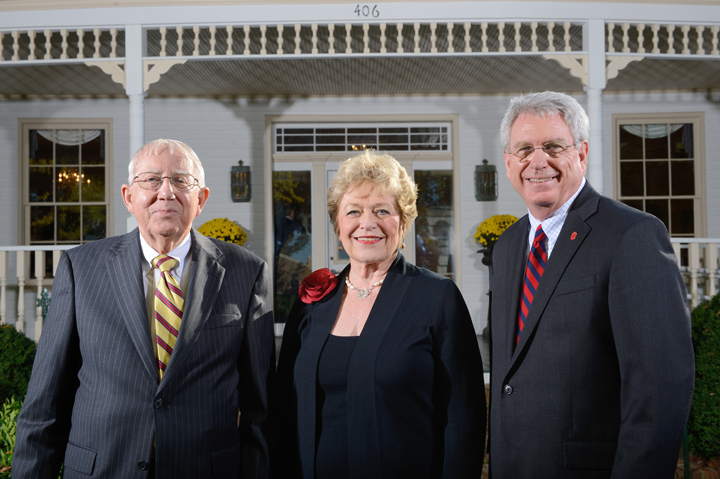 Roger and Susie Friou, at left, longtime supporters of the University of Mississippi and the Patterson School for Accountancy, visit with UM Chancellor Dan Jones.

University of Mississippi alumnus Roger Friou might have attended a different university, except his mother, Annie Belle H. Friou of Tupelo, Miss., sought the advice of a family friend on the best accountancy program available for her only child.

In turn, Friou assures many young people also enjoy the benefits of his alma mater's accountancy program through scholarships and other support, as well as utilizing his accountancy background through alumni service to strengthen the overall university.

The Ridgeland, Miss., businessman and his wife, Susie, have just expanded one of their scholarship endowments with a $100,000 gift. After earning his undergraduate and graduate degrees in accountancy from Ole Miss, Friou has committed major gifts to UM's Patterson School of Accountancy, as well as decades of service to the accountancy school and the University of Mississippi Foundation.

"My mother was absolutely correct in guiding me to Ole Miss," said Friou. "When she passed away in 1984, the first scholarship I established was in her memory. I have always maintained a great interest in income taxes, and the scholarship bearing her name assists outstanding fifth-year students focusing on taxes and preparing for a career in public accounting."

Friou and his wife became interested in establishing a second scholarship in 1998, when James W. "Jimmy" Davis was the accountancy dean and began efforts to substantially increase the number of accountancy scholarships. With a $250,000 gift, the couple set up the Roger and Susie Friou Scholarship Fund.

"At that time there were no scholarships for freshmen who had already selected accountancy as their major. I decided that having such a program would definitely help to attract quality students to the accountancy program. This has been very rewarding for Susie and me, presenting eight to ten scholarships annually. Meeting each year's scholarship group has been a great pleasure," said Friou, who is a member of the School of Accountancy Alumni Hall of Fame and has also supported a scholarship fund named for Davis, faculty endowments at the university's Medical Center, and Ole Miss Athletics.

Friou has witnessed his investments making a mark. The undergraduate (No. 9), master's (No. 9), and doctoral (No. 8) degree programs in the Patterson School of Accountancy are all now ranked within the nation's Top 10, with the master's and doctoral programs placing Ole Miss as the No. 1 Southeastern Conference school in the national rankings.

"It's spectacular to know the Patterson School has come so far," said the donor. "We have generous alumni support and outstanding professors. I've wanted to be involved as an alumnus because attending Ole Miss was such a life-changing experience for me. My dad passed away when I was fourteen but he left me just enough money to go to college, inspiring me to help deserving young people pursue college degrees. I would hasten to tell alumni that without private gifts, Ole Miss would not be the university we know. Our future is unlimited as far as continually moving ahead, but resources are an absolute requirement."

UM Chancellor Dan Jones expressed appreciation to the couple. "We are deeply grateful for the longtime support of Roger and Susie Friou, who have made tremendous investments in the life of this university. We often ask alumni and friends to consider how they can strengthen Ole Miss for current students and for generations to come. Their thoughtful gifts and tireless service reflect their personal philanthropic values and exceptional dedication to this university."

Mark Wilder, dean of the Patterson School of Accountancy, said for academic programs to achieve national prominence, a strong base of alumni and friends is critical.

"Roger Friou stands as an outstanding graduate who has committed leadership, personal resources and considerable time to the Patterson School," the dean said. "He serves on the school's Advisory Board and has played a major role in our growth and rise in prominence over many years.  I have observed first-hand over a fifteen-year period the tremendous positive impact that the Friou Accountancy Scholarships have made on our program. These scholarships have enabled us to recruit top talent to both Ole Miss and to the Patterson School, further strengthening our program and helping us move up in the national rankings. We thank Roger and Susie for their continued generous support and for assuring that their legacy is one of life-broadening educational opportunities."

Not only has Friou's service impacted the accountancy school but also the entire university through his alumni volunteer role since the late 1980s with the University Foundation, where endowed funds stand at $493 million. With shrinking state support for higher education, attracting private support has taken on critical importance. The effective management and investment of those gifts have always been an "extreme priority" to the foundation, said Sandra Guest, vice president of the foundation.

"Roger Friou has dedicated years of service to the UM Foundation Board and our Joint Committee on University Investments and the Audit Committee," Guest said. "Ole Miss is in a much better position financially than most because of university and alumni leadership. Roger takes board service as seriously as anyone I've ever known and is meticulous in his review of board notes. We are truly grateful for his expertise, guidance and the time he shares with us, and we also appreciate Susie for supporting his service to the university."

Friou began his career at Standard Oil (now Chevron) and retired as vice chairman and chief financial officer of Jitney Jungle Stores of America in 1997. He served for 14 years on the board of the Luckyday Foundation, which provides major scholarship support and other programming for academically deserving students with financial need.

"Through my service on the Luckyday Foundation, which awards a large number of scholarships to Ole Miss students, and through the scholarships that my wife and I have created, I have been able to interact with both students and faculty," he said. "This helps maintain my desire to give back to our university and assist students in receiving a great education."

Roger and Susie Friou are the parents of two sons, Tom and Stuart, and five grandchildren.

Individuals and organizations interested in learning more about providing private support to the Patterson School of Accountancy can contact Jen McMillan, development officer, at 662-915-1993 or mcmillan@olemiss.edu.