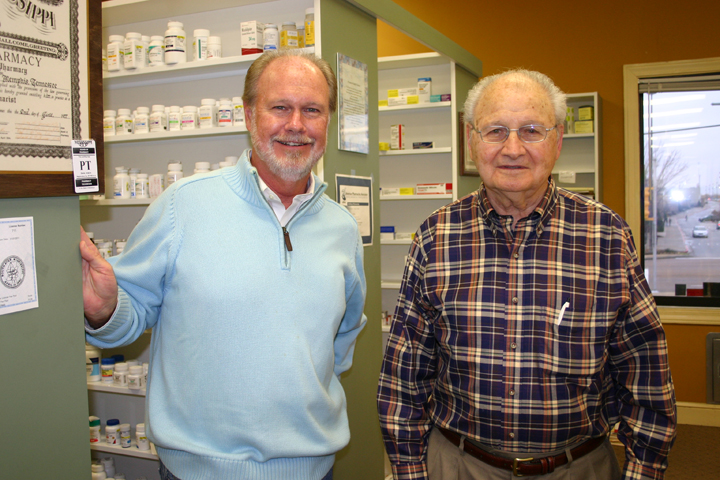 Many of the siblings' fondest memories are connected with that soda fountain, where their mother, Martha, often worked. As a child, Anita, a 1981 graduate of the University of the Mississippi, liked to spend her time sitting on the fountain's round, spinning stools.

"I could sit and color while watching Mom serve coffee, cook and make everyone feel like they were the only customer in the store, while watching Daddy behind the pharmacy counter fill prescriptions and making each customer feel like his or her illness was the most important," she said. "The drugstore was a happy place, and I loved being there with Mom and Dad while they worked."

"The soda fountain was a big hit," said Steve, a 1977 Ole Miss graduate. "My mom ran it and also did the accounting. We would have guys from the phone and power companies come in to eat. If the (drug) store didn't make it, we were going to survive because of the money the fountain brought in."

To honor Joe and Martha, as well as their love for Ole Miss, the siblings and their families, contributed $25,000 to UM's School of Pharmacy to create the Joseph G. and Martha Oliver Family Endowment.

"The family was in Nashville with us for Christmas," Joe said. "Martha and I were given the last gift to open. I unwrapped the package and found a letter that expressed how much we mean to each of our children and grandchildren and telling us how proud they are to be part of the Ole Miss family. The letter also told us about the endowment. I got very emotional, and a few tears were shed."

"We are deeply grateful for the support of the Olivers," said David D. Allen, dean of pharmacy. "Their endowment reflects the entire family's love for Ole Miss and the School of Pharmacy, and their generosity will be of great assistance to our students with financial needs."

Anita said that the endowment was the perfect gift.

"Daddy loves Ole Miss and the pharmacy school beyond words, and to be able to give him something that allows another person to experience what he has been blessed with was fitting," she said. "The School of Pharmacy allowed Daddy to realize his dreams of his own successful business.

"We knew that Daddy has a love for pharmacy and Mom has always been right beside him all the way," Steve said. "We wanted to honor them both by giving to the School of Pharmacy. My hope is that this will help students alleviate their financial burdens and give them the opportunity to help advance the profession."

Joe earned his bachelor's degree in pharmacy in 1955. While a student, he received a Taylor Medal, the university's highest academic award, and was awarded the Lehn and Fink Medal, which recognizes advancement in pharmaceutical science.

In 1960, Joe opened the Oliver Rexall Drugstore on Elvis Presley Boulevard in Whitehaven, two miles from Graceland, Presley's home. "It was a complete drugstore," he said. "We delivered too."

Before the existence of department stores and shopping malls, JoAnne said the family drugstore was one of the only places to buy toiletries and nice gifts. As a young girl, she vividly remembers a beautiful woman shopping at Oliver's cosmetics counter.

"She purchased bright red lipstick, the blackest eyeliner and purple eye shadow," she said. "She had a cone of hair that stood at least six inches off her head. I had never seen anything like it."

The woman was Priscilla Presley.

"Elvis had over-the-counter items delivered to Graceland throughout his life," JoAnne said. "Oliver's had a green Jeep that delivered and was often driven by boys who eventually became Ole Miss graduates. One of them was my husband, Gary Wright. The delivery boys would pull through the gates of Graceland and deliver merchandise to the guard, who was Elvis's Uncle Vester."

The Olivers opened a second store on Stateline Road in Southaven in 1968.

"Daddy was working both stores from 8 a.m. to 9 p.m. waiting for me to get out of school," said Steve, who earned a bachelor's degree in pharmacy. "I graduated on May 16 and went to work at the Southaven store on May 17. I've been working with my father for 35 years, and we have never had an argument."

Today the Whitehaven store is closed, and Steve owns the Oliver Drug Store on Physicians Lane in Southaven, the city's only independent pharmacy.

"Our pharmacy has endured because of how we take care of our customers," he said. "We know them by name when they walk in the door. We are servicing three generations of families now."

Not only that, Joe said, "We know the children's names, grandchildren's names and even the pets' names. We attend the weddings, the births and the funerals."

JoAnne said that Oliver Drug Store is "one of those places where you walk in the door and feel the memories of people whose lives you touched and who touched your lives. It's a place where I learned that the more you give, the more you get back.

"My parents gave and loved unconditionally and taught not only their children but also their grandchildren what work ethic and discipline bring you in life," Anita said. "They gave our family a true love for Ole Miss, and it thrills us that future students will find success and love as Mom and Dad shared with each of us."

The Joseph G. and Martha Oliver Family Pharmacy Endowment is open to receive gifts from individuals and organizations. To contribute, send a check with the fund noted to the University of Mississippi Foundation, 406 University Avenue, Oxford, MS 38655; contact Raina McClure at (662) 915-6967 or rmcclure@olemiss.edu; or visit www.umfoundation.com/makeagift.