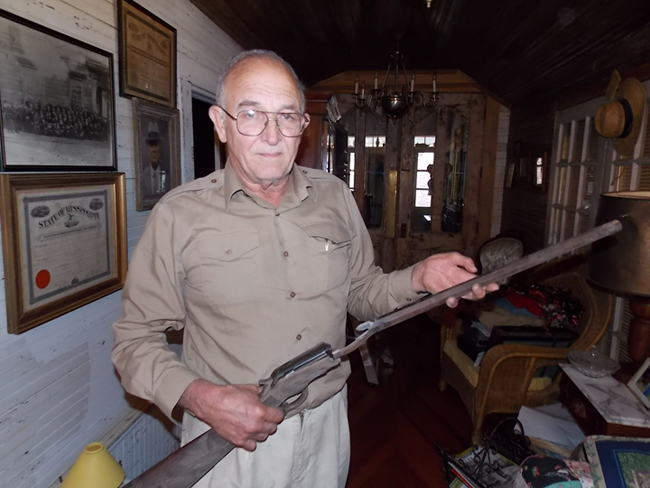 On any given day, you are likely to find John Goudelock out in his cow pasture, driving his tractor and feeding his herd.

Or, you might catch the Myrtle, Miss., man in his woodworking shop etching intricate patterns on his hand-carved duck decoys. If he's not there, you might try checking under the hood of the 1930 Ford Model A he's restoring.

A retired surgeon, Goudelock, 64, is by turns a cattle farmer, a woodworker, a gunsmith, a metalworker, a gardener and a mechanic.

That he even has a left hand today, though, is somewhat miraculous – an amazing feat that Goudelock ascribes to the skills of University of Mississippi Medical Center surgeons, who were able to save most of his left hand function after an explosion all but destroyed it.

Out of gratitude, Goudelock has set up a fund to support hand surgery at UMMC, both through annual gifts and through a bequest in his will.

"I was devastated to think of what I would do with one hand. Now I have about 65 percent of my function back, which sure beats the heck out of zero," Goudelock said. "I was very grateful, so I took a look at my savings and decided I wanted to do something."

Goudelock's journey from patient to benefactor began on December 10, 2003. It was supposed to be a joyous time in his life. After 15 years as a divorcee, Goudelock had remarried. Just 10 days after the wedding, in fact, he was relaxing on the back porch of his historic home in Myrtle with wife Mary.

He brought out his Winchester Model 1886 lever-action rifle, a gun he had proudly restored by hand, and began target practice. When he pulled the trigger, the gun exploded and as well as one of his hands.

The blast destroyed both of the major arteries and both major nerves that run through the hand providing blood and sensation to the rest of the hand. He was rushed to a Memphis, Tenn., hospital, where emergency surgery was able to preserve what remained.

The day after surgery, the doctor warned that Goudelock would eventually lose the hand to amputation. "I wasn't in a mood to accept that," he said.

As a surgeon in Vietnam in the 1960s, Goudelock had repaired similar wounds. He spoke with a Navy SEAL friend who remembered him saving the hand of a fellow soldier who had been severely injured in an explosion.

With his friend's encouragement, Goudelock decided to seek a second opinion. The first doctor he saw after his initial surgery said he would not be able to restore function to his hand. So did the second. And the third. And the fourth, fifth and sixth.

"At that point I started to become discouraged," Goudelock said.

His fortune changed six months after the accident during a routine visit to the University of Mississippi Medical Center. While walking through the Medical Center, he passed a door and the word "microsurgery" caught his eye. He popped in and asked for an appointment. Dr. Bill Lineaweaver, then a faculty member in UMMC's Department of Surgery, spoke with him, listened to his theories and ultimately decided to go ahead with a risky reconstructive surgery.

"He was the first doctor who took the time to examine my hand in detail," Goudelock said.

After an eight-hour surgery, doctor and patient were hopeful. Over the next 90 days, feeling gradually returned as nerves began to regenerate. Goudelock was working in his garden when he felt what he thought was an ant bite on the fingers of his left hand. Another ant bite came, causing him to realize the sensation was the feeling returning to his fingertips.

"They really see the teaching and research value of doing these types of procedures," Goudelock said.

Goudelock trusts the hand surgery fund he's established can help others experience function being restored to injured hands, rather than being forced to live with severe disability. In a rural state like Mississippi, many depend on their hands for their livelihood, Goudelock said. Those who suffer injuries like his often find themselves in difficult straits.

"Patients with injuries to their hand, they're not able to work." he said.

Goudelock hopes that by enhancing training and faculty support, the endowment he's created will help change that.

"In the future," Goudelock said, "I see people coming from all over for hand surgery [to UMMC] like they go to MD Anderson for cancer."

In the meantime, John Goudelock will keep on tinkering with his rebuilt hand, and enjoying every minute of it.