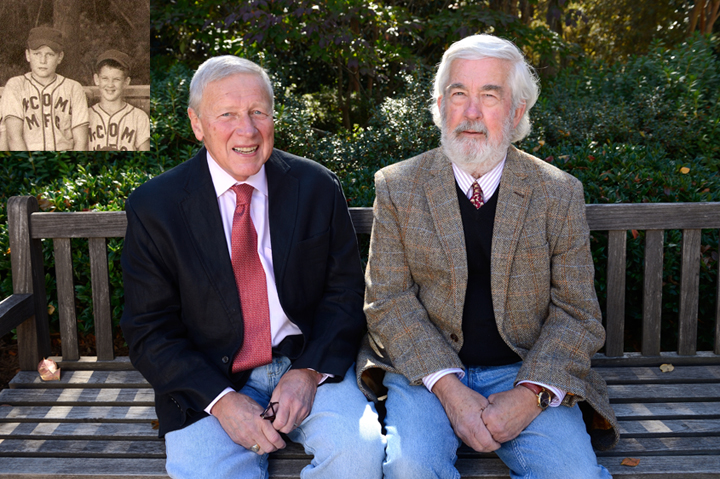 A 60-year friendship between attorney James P. "Butch" Cothren of Jackson and journalist and author Curtis Wilkie of Oxford has influenced both men's lives in immeasurable ways. Now the legacy of that friendship will expand through the lives of University of Mississippi students who will benefit from a scholarship endowment created in Wilkie's name.

Cothren and his wife, Peggy T. "Pat" Cothren – major supporters of their alma mater – have presented a new gift of $125,000 to pay tribute to Wilkie through scholarships in UM's Meek School of Journalism and New Media.

"We've been great friends all our lives and we think of our friendship as being authentic," said Butch Cothren, a McComb, Miss., native who earned undergraduate and Juris Doctor degrees from Ole Miss before going on to build a successful law practice. "Pat and I wanted to do something more to support the university, and we decided to make a gift to honor Curtis, who has done so much for Ole Miss from teaching to hosting visitors on the campus and in his home."

The Cothrens are credited with reconnecting Wilkie to Ole Miss and Oxford, which ultimately brought the acclaimed journalist back to teach and mentor journalism students.

"Butch is my oldest, closest friend. We've been pals since he was shortstop and I third baseman for the mighty McComb Manufacturing Tigers in Little League. Although we attended different high schools, joined different fraternities at Ole Miss, and have always lived in different cities, Butch and I stayed in touch. It was Butch and Pat who introduced me to the Grove in 1993 after I had been away from Oxford for more than 25 years, and their friendship played a role in my decision to move back to the South."

Butch Cothren – an American Board of Trial Advocates and American College of Trial Lawyers member who has been listed in the Best Lawyers in America publication every year since 1991 as a testament of his professional achievements – said the impetus behind the scholarship gift was the loss of another close friend and UM alumnus, Franklin Holmes of Raleigh, N.C.

"Pat and I decided one of us in our circle of friends needed to have a legacy at Ole Miss and there is no better way to impact a university than through scholarships. Ole Miss offers a great atmosphere and opportunities to learn, and we have been impressed with the growth of the journalism school," he said.

Wilkie recalled the evening he learned of the scholarship. "My wife Nancy and I were at dinner at Butch and Pat's Oxford home when he somberly said he had an announcement. I braced for bad news. When Butch said he wanted to establish a scholarship in my name, I was flabbergasted. 'Touched' may be a corny word, but I was very touched.

"I'm delighted to think that this will help our students and the Ole Miss journalism program, where I've been teaching for eleven years. It's a grand gesture by Butch.  He was motivated, in part, by the death a year and a half ago of our great friend, Franklin Holmes. We three ran around together a lot at Ole Miss and Butch wanted to do something for our alma mater before the two of us pass on, too."

Since 2004, Wilkie has held the Kelly G. Cook Chair of Journalism at Ole Miss, where he was also named the first Overby Fellow in the university's Overby Center for Southern Journalism and Politics. The journalist enjoyed a 25-year career with the Boston Globe as a national and foreign correspondent until the end of the 2000 presidential campaign. He covered eight president campaigns and served as chief of the Globe's Washington bureau. Among his work covering wars and conflicts overseas, Wilkie established the Globe's Middle East bureau and lived in Jerusalem in the mid-1980s.

Wilkie is also the author of many national magazine articles and the author or co-author of several books, including the Fall of the House of Zeus and Dixie: A Personal Odyssey through Events that Shaped the Modern South.

"A hallmark of the Ole Miss experience is the close friendships our students develop and nurture throughout their lives. Pat and Butch Cothren have taken this a step further by recognizing their talented friend, Curtis Wilkie, through the establishment of a scholarship endowment that will help many promising students achieve rewarding journalism careers. We are deeply grateful for the support of the Cothrens, who obviously gave a great deal of thought to identifying a meaningful way to celebrate a friendship and their relationship with Ole Miss. Their generosity and vision are inspiring," the chancellor said.

Pat Cothren – a native of Dublin, Miss., who earned a degree in education and with her husband is a benefactor of the School of Law and Ole Miss Athletics – has been a part of the Cothren-Wilkie friendship for 45 years.

"There is nothing in life more important than friendship, and Butch and Curtis are blessed to have one of those friendships which time and distance have never affected," she said.

When asked about favorite memories, Cothren and Wilkie laugh and the stories begin to flow. Cothren described his friend as "kind of a rascal" as a youngster who got into trouble for harassing the Little League umpire in a season when their team only won one game. "Curtis is the only Little Leaguer I have ever known or heard of who almost got ejected from a game for razzing the umpire."

"We were involved in a lot of mischief when we were younger," Wilkie said. "Butch may recall the night – we were back from college during Thanksgiving break – that I dropped him off at home after a night of carousing, then drove my parents' car back and forth through a big pile of leaves, scattering what he had spent all afternoon raking up in his yard. I guess he's forgiven me by now."

The majority of the funds provided by the Cothrens will be held in a permanent endowment with the annual income providing academic scholarships awarded to full-time students who are journalism majors. The other part of the gift will be used to award the scholarship beginning fall 2013. Selection of scholarship recipients will be directed by a committee of the Meek School faculty.

The Curtis C. Wilkie Scholarship Endowment is open to receive gifts from individuals and organizations. Checks with the scholarship name noted in the memo line can be mailed to the University of Mississippi Foundation, 406 University Avenue, Oxford, MS 38655. Gifts can also be made by contacting John Festervand, development officer for the Meek School of Journalism and New Media at 662-915-1757 or jfesterv@olemiss.edu; or visiting online at www.umfoundation.com/makeagift.