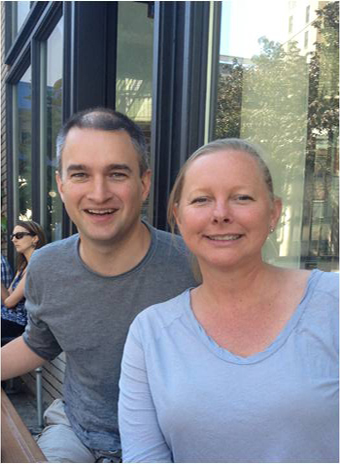 Kristie and Charles Abney of Atlanta

Kristie and Charles Abney of Atlanta have made a major gift to the Southern Foodways Alliance (SFA), an institute of the University of Mississippi's Center for the Study of Southern Culture (CSSC), to help meet the goal of endowing a professorship in the growing academic study of foodways.

"We made the gift because we are passionate believers in the mission of the Southern Foodways Alliance," said Kristie Abney, senior vice president for the commercial real estate firm Transwestern. "The work that the SFA does to document, study and celebrate the foodways of the South is of tremendous value not only to the university but also to all Southerners.

"Charles and I are life-long, many generations back, Southerners. The people and stories the SFA shines light on reflect our heritage and make us proud of our region. A full-time foodways professor at the University of Mississippi will ensure that generations of students are immersed in our incredibly rich and valuable Southern food story.  This is something about which Charles and I are truly passionate."

Charles Abney is a portfolio manager and director with ZWJ Investment Counsel. Among other civic commitments, he serves on the board of Atlanta's High Museum of Art and Kristie Abney chairs the Atlanta Convention and Visitors Bureau's annual fundraising event, which supports the Atlanta Community Food Bank.

The mission of the SFA-based at UM since its 1999 founding-is to document, study and celebrate the diverse food cultures of the changing American South. The membership-supported institute directs an annual Southern Foodways Symposium, as well as numerous lecture series, film screenings and other events. The SFA's oral history program, widely recognized as the most innovative in its field, has collected almost 700 interviews, while the SFA film initiative has produced more than 30 films. SFA is now expanding its work into UM classrooms.

The Abneys' gift boosts the SFA to within $140,000 of its $500,000 goal for the professorship. Once that mark is achieved, a matching commitment from the College of Liberal Arts will fund the professorship going forward.

Dean of Liberal Arts Glenn Hopkins said, "Having a foodways professorship will build on the Center's longstanding commitment to the highest standards of scholarship and the Southern Foodways Alliance's vision for training the next generation of foodways scholars. The College, the Center and the SFA are committed to working together to establish a foodways professorship at the University of Mississippi, and we are deeply grateful for the Abneys' generous support of this position."

Ted Ownby, director of the CSSC and a professor of history and Southern Studies, expressed appreciation for the impactful gift. "We appreciate the confidence that the Abneys have shown that the SFA and Southern Studies will use their gift in a smart and productive way. It's exciting to think about what a difference a gift like this can make. Thanks to the Abneys' generosity, we are that much closer to filling this position with a full-time appointment for the fall of 2014."

Ownby noted that academic interest in food studies has expanded in recent years and will continue to grow.

"We can already see how foodways teaching can both fit into Southern Studies and go beyond what we have done before. In the fall of 2011, twenty students took the first Southern Studies 555 class (Foodways and Southern Culture) with postdoctoral fellow Angela Jill Cooley," the director said. "Some of them are continuing topics from that class as part of their M.A. theses and other independent work."

"We imagine more students, whether in Southern Studies or other fields, coming to the university because of their interests in food and culture. We also expect a lot of students will develop interest in the field once they get here. This is developing at the perfect moment, since so many of today's students understand food as part of their own politics, raising all sorts of issues that are likely to keep changing in the future," Ownby said.

Individuals and organizations can make gifts to support the Foodways Professor Endowment by mailing a check with the fund noted to the University of Mississippi Foundation, 406 University Avenue, Oxford, MS 38655; visiting www.umfoundation.com/makeagift; or contacting Nikki Neely, development officer for the Center for the Study of Southern Culture at 662-915-6678 or nlneely@olemiss.edu.

The Center for the Study of Southern Culture at the University of Mississippi investigates, documents, interprets and teaches about the American South. CSSC emphasizes academic programming as the foundation of its work, offering both undergraduate and graduate programs in Southern Studies through more than 60 courses taught by faculty in 10 departments. CSSC houses two institutes, the Southern Foodways Alliance and the Media and Documentary Projects Center. By teaching classes in foodways, the CSSC seeks to expand on the academic and educational strengths developed since its founding in 1977. For more information, visit www.olemiss.edu/depts/south or http://www.facebook.com/SouthernStudies. For more information about the Southern Foodways Alliance, visit www.southernfoodways.org.