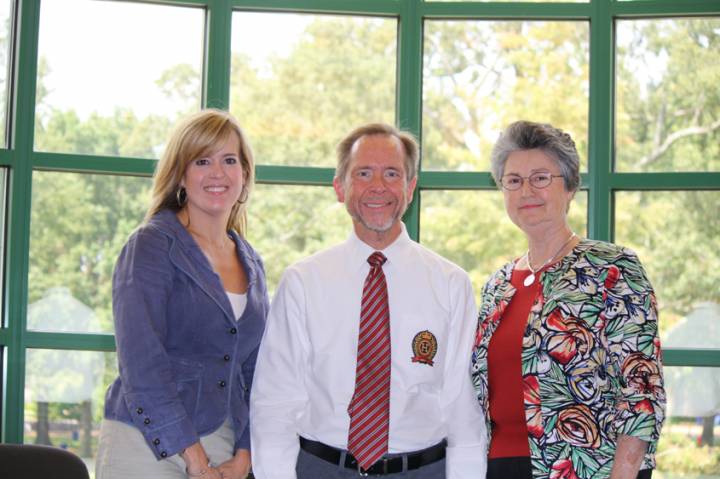 When Ross Sanderson was around five years old, his dad, Albert Sanderson, introduced him to the University of Mississippi on a fall Saturday afternoon, and the youngster received a football from Ole Miss cheerleaders. In the future, selected UM pharmacy students will receive scholarship support from a fund named in tribute to Ross Sanderson’s life.

At the age of 19, Sanderson – who had attended Warren Central High School – died in a car accident. Describing his son as “outgoing and personable,” Albert Sanderson, a Nashville pharmacist, said he thought of his own alma mater and the days on campus he enjoyed with his son. He has committed $75,000 to an endowed scholarship, honoring his son’s life by providing assistance to Ole Miss pharmacy students.

“Ross was so outgoing; people gravitated toward him,” Sanderson said. “My son wanted to get the most out of every situation he encountered. He had not enrolled in Ole Miss, but I thought he would eventually end up as a student on the Oxford campus. Ross and I came to a number of football games across the years. He was always sports-minded and a talented competitor himself in karate.”

“Creating an endowed scholarship is such a meaningful way to honor the memory of Ross Sanderson,” said Barbara Wells, dean of the School of Pharmacy. “This scholarship will recognize the remarkable person that he was by expanding his legacy and passing on the value of education to future generations of pharmacy students.

“The Quentin Ross Sanderson Scholarship will allow many future students to benefit from exceptional educational experiences,” she said. “We are deeply grateful to Albert Sanderson for considering his alma mater when searching for a way to honor his son’s life. Helping provide education to others in perpetuity will have such a significant impact on individual scholarship recipients and our society at large.”

Ross Sanderson died in 2002, and because he was so young, his father looked to his own UM degree and career to designate the field of study for the scholarship. The Mississippi native was the first in his Jones County family to choose a health-related career.

“I felt a career in the health-care field would be my contribution to the world,” Sanderson said. “I had family friends who were pharmacists, and I admired the service they gave and the relationships they built. A pharmacy career is about helping people.”

Pursuing a pharmacy degree meant considering UM and Auburn University, and in the end, Sanderson said he decided he couldn’t leave the state he loved. He said he hopes the Quentin Ross Sanderson Scholarship helps others pursue college degrees and careers in pharmacy as well as opens doors to many other opportunities.

“Attending Ole Miss was such a growing experience,” the 1979 graduate said. “I learned so much and met so many people who are still my good friends. Having part of the pharmacy training at the University of Mississippi Medical Center (UMMC) in Jackson was so interesting, particularly working side by side with future physicians and nurses. It was a collaborative atmosphere.”

After graduation, Sanderson joined the Mercy Hospital staff in Warren County. His career has also included stints with Walgreens and Wal-Mart pharmacies and UMMC’s Children’s Hospital. Now he is associated with K-Mart Pharmacy in Nashville. He is the father to two other sons: Drew Sanderson of Jackson, Miss., a college student; and Derek Sanderson of Clarksville, Tenn., who works for Dell Inc.

The Quentin Ross Sanderson Scholarship fund is designed to assist full-time pharmacy students who have been admitted to the professional pharmacy program. A minimum grade-point average of 3.0 is required to apply, and scholarship selection will be conducted by the School of Pharmacy faculty. Recipients must be Mississippi residents with first preference given to students from Jones County, where Albert Sanderson grew up, and second preference to students from Warren County, where Ross grew up.

Sanderson established the scholarship endowment with a cash gift and will complete the scholarship fund through a planned gift. With this endowment, he becomes a member of UM’s 1848 Society, which recognizes alumni and friends who fund or plan a deferred gift in support of the university. Advance knowledge of bequest plans enables the university to fully understand and follow donors’ wishes, in addition to enabling UM to thank and recognize donors for their generosity.

The Quentin Ross Sanderson Scholarship fund is open to accept gifts from other individuals and organizations. Contributions may be made to the fund by mailing checks (with the fund noted) to the University of Mississippi Foundation, 406 University Avenue, Oxford, MS 38655 or by visiting www.umfoundation.com/makeagift.