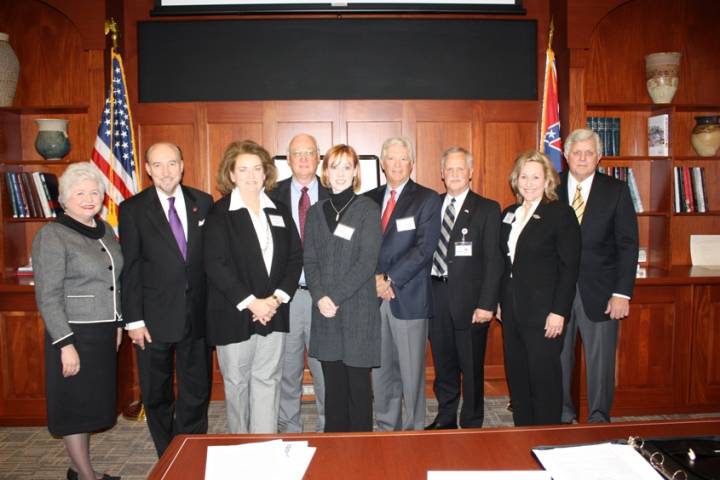 (OXFORD, Miss.) – The 2+2 Endowed Scholarship awarded to students who attend the DeSoto Center campus for all four years – two years with Northwest Mississippi Community College and two years with the University of Mississippi – has surpassed the $1 million level.

The fund-raising milestone was announced at a recent Northwest Foundation Board of Directors meeting by Northwest President Gary Lee Spears and Associate Vice President for Development Sybil Canon in announcing. Putting the fund for DeSoto County residents over the million-dollar mark was a $112,000 gift to the scholarship initiative from the estate of Elinor Herrington, the mother of Mike Herrington of Olive Branch, current member and former president of the board.

UM Chancellor Emeritus Robert Khayat was an invited guest at the board meeting and congratulated the group on the fund-raising partnership’s success. He also offered words of encouragement and guidance, as the board continues its efforts.

“This type of scholarship is unique, outstanding and trail-blazing, to combine the fund-raising efforts of a four-year (university) and a community college,” said Khayat.

“I am grateful to all of the members of the Northwest family who have made this scholarship what it is today,” said Spears. “So much hard work and dedication from our administration and friends of the college came together to make all of this possible.”

While Dr. Robert and Shirley Seymour and their daughter, Holly Renee Seymour, of Hernando, headed up a steering committee that began the solicitation process for this scholarship endowment, Herrington and his wife, Debra, spearheaded what would become the annual 2+2 Scholarship Golf Tournament at Cherokee Valley in Olive Branch.

Golf tournament steering committee member Marty Haraway approached Aubrey Patterson, president and CEO of BancorpSouth, to be the $10,000 title sponsor for the tournament, and BancorpSouth has honored that commitment for seven years. The successful tournaments have contributed approximately $200,000 to this scholarship initiative.

“With the proceeds from the golf tournaments and the most recent contribution from Elinor’s estate, the Herringtons have been directly responsible for almost one third of this initiative,” said Canon.