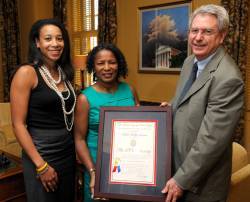 (OXFORD, Miss.) – Perseverance is a quality Edith Kelly-Green has used in building her life, and one that she wants to reward in others. She has committed a deferred gift of $375,000 to endow three new University of Mississippi scholarships to help young people – particularly those who may have overcome adversity – seek college degrees.

Two of the scholarships are named for women in Kelly-Green’s life who know something about perseverance: her 85-year-old mother-in-law, Marion Mullin Kelly Gordon, and her 27-year-old daughter, Jayna Kelly. For over 20 years, Gordon was a cook for sorority and fraternity houses on the UM campus. Two of Mrs. Gordon’s children graduated from UM and one of her granddaughters is in this year’s freshman class.

A 2005 UM graduate, Kelly is pursuing a medical degree at the University of Tennessee Health Sciences Center in Memphis and plans to become a surgeon. The third scholarship is named for Kelly-Green, who was the first African-American woman hired at the public accounting firm she joined after earning a UM accountancy degree and the first African-American female vice president at FedEx Corporation.

“I was fortunate to attend Ole Miss and receive an education through scholarships and loans,” said Kelly-Green, who with her daughter, Jayna, and her son, James Kelly, own 11 Lenny’s Sub Shop restaurant franchises. She also is the retired vice president and chief sourcing officer for FedEx Corporation. “By God’s grace, I have enjoyed an extraordinary career and family, and by many people’s standards, I have been successful. However, I know that to whom much is given, much is expected.”

Previously Kelly-Green endowed a four-year scholarship that benefits students in the Patterson School of Accountancy in memory of her grandmother, Christine Mitchell Hickonbottom.  Mrs. Hickonbottom raised Edith while working as a maid for university students at what was then known as the Veteran’s Village. Already three students have been awarded this scholarship.

UM Chancellor Dan Jones expressed appreciation for her deferred gift and other contributions.

“Alumna Edith Kelly-Green embodies the spirit of service that is a distinguishing characteristic of the University of Mississippi family,” he said. “We are profoundly grateful to Edith for this planned gift for scholarships, which will help ensure young people have access to transforming educational opportunities. For many years, Edith has also invested in Ole Miss initiatives by giving of her time, knowledge and experience. Her service and generosity have greatly strengthened this university.”

The new scholarships are established under the Ole Miss Women’s Council for Philanthropy, which Kelly-Green chaired in its inaugural years, 2000 and 2001, and continues to support as an active member. The OMWC, which has built an endowment of more than $8 million, enhances its financial assistance by providing recipients mentoring and leadership training – a three-pronged approach Kelly-Green said maximizes students’ educational experiences on their path to enjoying meaningful careers and becoming leaders and tax-paying citizens.

“I hope these scholarships will make a difference in many young people’s lives,” said Kelly-Green, who now spends time mentoring her own employees, a group which includes many young people and single parents. “I do not want anyone to be unable to attend Ole Miss because they can’t afford it. In this day and age, it is almost criminal not to pursue higher education.”

“Our family was not born into money,” said Kelly-Green, who hopes to encourage others to consider deferred or estate planning as a means of supporting the university. “We worked very hard to achieve what we have, and the idea of letting go of our money is probably a little more challenging because of that. However, I know of no better way to give to others than to create educational opportunities for them. This university needs more people to give – not equal gifts but equal sacrifice. You never know what a difference you can make by touching someone’s life.”

Jayna Kelly said of the scholarship in her honor, “I was surprised but very grateful. This gift continues to show me what an awesome person my mom is. Our family has been blessed, and to show our appreciation, we must give back to others who need assistance.”

First preference for all the future scholarships will be given to Mississippi students and second preference to Tennessee students. The Gordon Scholarship will be awarded for any academic major, and the Kelly Scholarship will go to biology majors. As with the Hickonbottom Scholarship, the Kelly-Green fund will be directed to accountancy majors.

“Edith’s generous investments in our students help ensure that we can continue building on the Patterson School’s legacy of producing exceptional accounting professionals, said Mark Wilder, dean of the Patterson School of Accountancy. “When students receive scholarships, they have a heightened sense of commitment to their studies and understand through example the value of giving back. Edith is one of our truly remarkable graduates who stands as an inspiring example to our students.”

In addition to her degree from UM, Kelly-Green earned a master’s degree in business administration from Vanderbilt University and is a certified public accountant. She was a senior auditor with Deloitte & Touche in Memphis before joining the FedEx Corporation. She was inducted into the Ole Miss Alumni Hall of Fame in 1999, is a member of the executive board of the Ole Miss Alumni Association and is a past board member of the University Foundation. In 2011, she will be inducted into the School of Accountancy’s Hall of Fame.

Among her civic activities, Kelly-Green served as co-chair of the Pyramid Re-Use Committee, was a founding member of the Women’s Foundation for a Greater Memphis, and has served on the board of directors for the Center City Commission and the Memphis Zoo and on the advisory board of Baptist Women’s Hospital. She provides leadership on the board of directors of the University of Tennessee Medical Group and Applied Industrial Technologies. A breast cancer survivor, she also helps promote opportunities to communicate and reduce the risk of cancer.

Kelly-Green’s new gift makes her a member of the 1848 Society, which recognizes alumni and friends of the university who have either funded or planned a deferred gift, such as a bequest or life income plan. The scholarships she has established are open to accept gifts from individuals and organizations. Those interested may do so by going online at www.umfoundation.com/makeagift, calling 800-340-9542 or sending a check with the particular scholarship noted to the University of Mississippi Foundation, 406 University Avenue, Oxford, MS 38655.  The same UM contacts can provide information on 1848 Society membership.