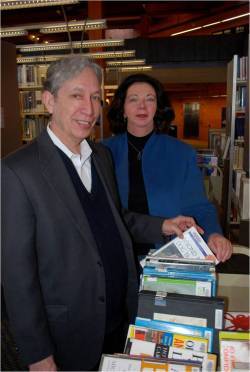 (OXFORD, Miss.) – As two University of Mississippi students firmly committed to paying their own way through graduate school, Jacque and Michael Dunn managed to make ends meet each month, thanks in part to his job at the J.D. Williams Library on the Oxford campus.

Recognizing the importance this job played in their lives and ultimately their careers, as well as the relationship between a library and the overall academic integrity of a university, the Dunns, who currently reside in Columbia, Mo., have committed a planned gift of $171,000 to the University Libraries.

“In addition to Mike’s personal connection to the library, we recognize the library touches every student and faculty member on campus,” said Jacque Dunn, a major gifts officer for the National Audubon Society. “We have always planned to give back to the University of Mississippi and acknowledge that we would not be where we are today without our college education and experiences.”

The Dunns have indicated that the gift is to be used to address the library’s greatest needs, as determined by the dean of libraries.

“Because of our careers, we both have experience with private gifts and know that it’s often rare for an institution to receive unrestricted money,” Jacque Dunn said.

“Jacque and Michael Dunn’s wonderful gift will give the University Libraries the flexibility to respond to critical needs,” said Julia Rholes, dean of libraries. “In these times of rapid technology changes, it is impossible to know exactly what library users will want in the future. This generous gift from the Dunns will help us continue being successful as we serve our academic community.”

Michael Dunn is a faculty member in the Missouri School of Journalism; general manager of KBIA, the university-licensed National Public Radio-member station; and executive director of the university’s Concert Series, which brings around 40 major events to campus and mid-Missouri each year. He received an undergraduate degree from the University of Southern Mississippi before earning a master’s degree in radio and broadcasting in 1977 and a doctorate in higher education/broadcasting in 1980 at Ole Miss. As a graduate student, he was hired at the J.D. Williams Library by the late James Butler to shelve books. He was promoted to the front desk and eventually was charged with supervising student evening staff and closing the library.

“I am an avid reader. Books and libraries have been very important to me since an early age,” Michael Dunn said. “I grew up in a small town in Tennessee and by the age of ten had read every book in the children’s section of the public library. My dad then asked permission for me to be allowed to start on the adult section of fiction and nonfiction books. ”

Jacque Dunn, a native of Oxford, said as a young child she considered becoming a librarian. After earning an undergraduate degree in art in 1976 and a master’s degree in broadcasting in 1979 at Ole Miss, she worked in commercial television in Oklahoma City and at the University of Oklahoma School of Journalism. In 1986, she served as a consultant for the opening of the Museum of Contemporary Art in Los Angeles, which allowed her to use both degrees. Following her husband to Mizzou, she joined its development staff, working at the university for almost 16 years, and now raises private funds for the National Audubon Society in the Mississippi River Region.

The daughter of Jack and Faye Fudge, Dunn grew up in the Ole Miss-Oxford community and recalls taking art lessons on campus as a child, as well as attending numerous concerts and plays. Her childhood memories include seeing novelist William Faulkner around town and spending time at Fudge Grocery, just off the Square on South Lamar – the store owned by her grandparents, Earl and Esther Fudge.

“I was very fortunate to grow up in a university community, and it significantly shaped who I am as a person,” she said.

The Dunns first met while enrolled in a broadcasting statistics class – when Jacque jokes that her test score of 97 over Mike’s score of 96 garnered his attention. The two look back on their Ole Miss experience with appreciation and affection, which is translating into their desire to provide support.

“The University of Mississippi has grown in a positive and powerful way,” Jacque Dunn said. “I think it is incumbent upon all of us to do what we can as far as giving back. Whatever people can give – it all adds up and impacts the university and the state of Mississippi as a whole. Mike and I hope this gift will inspire others to think about support they can give.”