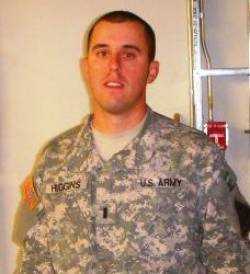 (OXFORD, Miss.) – Before Army 1st Lt. Andrew Higgins leaves Ft. Bliss in El Paso, Texas, tomorrow to begin a year-long deployment in Iraq, he let his feelings be known about the University of Mississippi. He planned a $20,000 bequest to benefit the Division of Students Affairs.

“Education has always been very important to our family,” said Higgins, 27. “My dad, Jack, is superintendent of schools in a district outside Cleveland, Ohio, and my mom, Karen, retired after a 35-year teaching career. When I was making my will – as is customary for those being deployed – my dad told me he thought it was extremely important to provide support for schools and universities.”

Higgins said he came to love Ole Miss and Oxford when he came to the campus in 2005 to pursue a master’s degree in higher education.

“Ole Miss is one of the best educational values around,” Higgins said. “I was very impressed with the university, and now I miss it so much. The university has become a large school, but there are so many opportunities for students. I am always so amazed that the emphasis continues to be on each individual student. There’s a lot of personal attention given.”

“We are deeply honored by Andrew’s thoughtfulness and generosity. At a time when he is preparing to deploy to Iraq, he has remembered Ole Miss and the Division of Student Affairs. We thank him for his gift but also for his willingness to serve our country. We pray for his safe return,” Ridgeway said.

Higgins will travel to Kuwait, where he will be stationed for one month, before traveling on to Iraq. On the eve of his first deployment, Higgins said he had known ever since the terrorist attacks on America that took place Sept. 11, 2001, that he wanted to serve his country.

“I felt that I wanted to give this service in a combat tour,” the Army lieutenant said. “I am definitely ready to go. There is a lot of anticipation surrounding the deployment, and I feel that we have been well-trained for this mission.”

Josh Whelan, the University Development officer who assisted Higgins in planning the gift, said he had been impressed with Higgins’ thoughtful tribute to the university and its students at this critical time in Higgins’ life.

“We are extremely grateful for alumni like Andrew who invest in future generations of Ole Miss students. His willingness to make this gift while serving on active duty speaks to his remarkable character,” he said.

Higgins, a native of Mansfield, Ohio, was first drawn to the university by its academic curriculum, ROTC program and the general campus. He served as coordinator of the Student Tour and Recruitment for Student Housing while at Ole Miss.

Before seeking a graduate degree, he earned an undergraduate degree in political science and communications studies at Baldwin-Wallace College in Berea, Ohio. He has continued his graduate studies online, earning a second master’s degree, as well as completing international education at Ewha University in South Korea. He said he plans to work on a doctorate after another two to three years in the Army and may pursue another type of federal service.