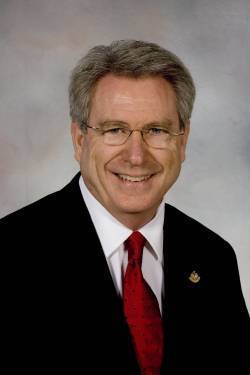 OXFORD, Miss. – Dr. Daniel W. Jones, vice chancellor for health affairs and dean of the School of Medicine at the University of Mississippi Medical Center in Jackson, today was named the 16th chief executive officer of Ole Miss by the Board of Trustees of State Institutions of Higher Learning.
Announced after a series of meetings with faculty, staff, students, alumni and community members, the appointment is effective July 1.

As chancellor, Jones, 60, will oversee the Oxford campus, Medical Center in Jackson, and degree-granting centers in Tupelo, Southaven and Grenada. He replaces Robert C. Khayat, who retires June 30.

"We have reason to celebrate today. I am confident the board has found the right person to take this great American public university to the next level of excellence," said IHL board member and search committee chair Amy Whitten of Oxford.

"I am humbled. It’s a great privilege to be a part of the university, which is in a great place because Chancellor Khayat has done a wonderful job," Jones said. "It’s frightening to think about following in his footsteps, but my life has been about service, and I am committed to serving the university to the best of my ability."

A respected academician, administrator and physician, Jones also is the Herbert G. Langford Professor of Medicine at the Medical Center. Last year, he served as president of the American Heart Association and has been named one of the "Best Doctors in America" from 1996 to 2008.

Jones succeeded Dr. Wallace Conerly as vice chancellor for health affairs and dean of the School of Medicine on July 1, 2003. As the Medical Center’s chief executive officer, he oversaw five schools and the health system. While he was CEO, the Medical Center restructured its clinical enterprise to create a more agile, market-responsive organization focused on quality, efficiency and clinical leadership. The work resulted in a turnaround in financial performance and selection as one of the Thomson Top 100 Hospitals in America.

They also led a campaign that raised $53 million, expanded the medical school’s class size from 100 students to 120 students per class and reorganized the medical faculty clinical practice plan from 17 individual practice groups to a single, unified one, resulting in more efficient management and improved patient care.

With completion of the Arthur C. Guyton Research Center, acquisition of funding for a research park, increased research funding and a plan to recruit 50 new research faculty over the next five years, the Medical Center’s research enterprise has been reinvigorated.

A native Mississippian, Dr. Jones graduated from Mississippi College in 1971, earned his M.D. in 1975 at the University of Mississippi Medical Center and completed his residency in internal medicine there in 1978. He had a private practice in Laurel, then went to Korea as a medical missionary in 1985.

He returned to the UM Medical Center as a faculty member in 1992. For most of his career, his patient care, teaching and research have focused on hypertension and prevention of cardiovascular disease.  He was the first principal investigator for the Medical Center’s participation in the landmark Jackson Heart Study, a National Institutes of Health-sponsored population study focused on cardiovascular disease in African-Americans.

A fellow of the American College of Physicians, Jones is certified by the American Board of Internal Medicine and is designated as a specialist in clinical hypertension by the American Society of Hypertension Specialists. He also is a member of AHA’s Council for High Blood Pressure Research and serves the association as national spokesperson on high blood pressure.

Jones is on the board of Global Resource Services, a non-governmental organization providing professional consultation to East Asian nations, including the Democratic Peoples Republic of Korea (North Korea).

Jones and his wife have two children. Their daughter, Jennifer, is married to Jaime Flechas, an Ole Miss graduate, and lives in Oxford. Their son, Jason, and his wife, Tiffany, live in Clinton.