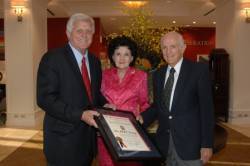 OXFORD, Miss. – Jim and Mary Margaret Bennett of Pearl will continue to fund the Faye Evans Bennett Ole Miss First Scholarship through a bequest to the University of Mississippi.
“We are most grateful for this generous gift from the Bennett family,” said Wendell Weakley, president of the UM Foundation. Planned giving is extremely important to Ole Miss because it helps secure the future of the university. A planned or deferred gift is truly the gift of a lifetime and creates a permanent legacy.”

The Bennetts created the scholarship in 2002 to honor Jim’s first wife, who died in 1961. Their bequest will allocate funds from their estate to further grow the scholarship, which helps deserving students attend UM.

“Helping other people is part of the rent we pay on our lives,” Jim Bennett, a Calhoun County native, has said about the scholarship.

Jim met Faye while he was stationed with the Naval Air Corps in Brunswick, Ga. After he was transferred to a facility near the nation’s capital, they married and later had two daughters. When World War II ended, Faye and Jim both enrolled at Ole Miss, where she earned her bachelor’s degree and he completed his master’s degree in education. His teaching career took the family from Amory to Pontotoc and then Jackson.

After Faye’s death, Jim later met Mary Margaret Coman and the two married. The Bennett daughters are both UM graduates, with Beverly Bennett Lee of Dallas, Texas, earning her bachelor’s degree in home economics and Jeanne Bennett Brinson of Brandon earning her bachelor’s degree in business administration. The tradition continues with four granddaughters who are UM graduates.

Although he officially retired as a public school administrator in 1985, Jim along with Mary Margaret, has done volunteer mission work in his retirement. They have scores of stories and memories from their mission experiences in Argentina, China and Mongolia.

The Bennett’s gift is part of the university’s MomentUM campaign, a four-year initiative to raise $200 million. Funds raised through the campaign, which ends in December 2008, will support scholarships, graduate fellowships, faculty support, a basketball practice facility, residential colleges and a new law school on the Oxford campus. Also in the plans are a cancer center at the UM Medical Center and a new building to house the School of Pharmacy, both in Jackson.