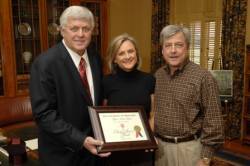 OXFORD, Miss. – Because of their love for the University of Mississippi and their belief in its mission, UM alumni Neel and Pam White of Austin, Texas, have made a gift to support the Chancellor’s Trust at Ole Miss.

The Whites said they wanted to give to the Chancellor’s Trust primarily because of the many positive changes and vast improvements made to the university under Chancellor Robert Khayat’s leadership.

“Chancellor Khayat has proved time and again to be a master at forward thinking,” Neel White said.  “His latest vision of creating a residential college on campus will greatly enrich and enhance the experience of college life for many students.  The chancellor is never satisfied with the status quo.  He is always one step ahead into the future and betterment of Ole Miss.  It’s exciting to watch his innovative ideas come to fruition, but more importantly, it’s exciting to be a part of it.”

Established in 1975, the Chancellor’s Trust fund is used to address the university’s greatest needs and requires a minimum gift of $25,000.

“We are profoundly grateful to Neel and Pam White for their support of the University of Mississippi,” Chancellor Khayat said. “The Chancellor’s Trust is used to provide scholarships, enhance faculty development and respond to the university’s growing and changing needs, all which help us to be a great American public university.”

The Whites are longtime supporters of Ole Miss. Many of their other gifts have supported athletics, and the White Construction Company was contracted to build the indoor practice facility on the Oxford campus.

Pam, a Greenwood native, and Neel, a Clarksdale native, met at Ole Miss in 1975. They both graduated in 1978 with a BSN and a BBA, respectively. They married six months later and relocated to Texas.  In 1981, Neel opened the Austin branch of the Ridgeland-based White Construction Company.  Today, he serves as CEO and co-owner with his brother, Guy.

The White family has a long tradition with Ole Miss. Neel’s parents, brother, and two sisters all attended the university. Continuing in that tradition is the White’s daughter, Kelly, who is currently a student. Their son, Charles Neel III, has grown up tailgating in the Grove and has fond memories of Ole Miss on game day.

The White’s gift is part of the university’s MomentUM campaign, a four-year initiative to raise $200 million. Funds raised through the campaign, which ends in December 2008, will support scholarships, graduate fellowships, faculty support, a basketball practice facility, residential colleges and a new law school on the Oxford campus. Also in the plans are a cancer center at the UM Medical Center and a new building to house the School of Pharmacy, both in Jackson.