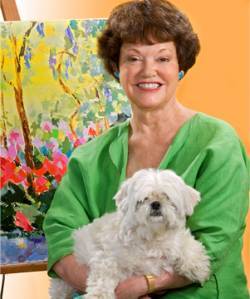 Miriam Weems with Sassy, one of many pets she’s rescued. Photo by Lonnie Kees.

OXFORD, Miss. – “Recognizing and rewarding people who are kind to animals” is the aim of a new scholarship endowment at the University of Mississippi, said alumna Miriam Wilson Weems, who established the fund.
Weems, who holds degrees in French and art from Ole Miss, recently pledged $25,000 to create the Miriam W. Weems Pet Lovers Scholarship Endowment. Scholarship recipients will be full-time students in the College of Liberal Arts who have a history of caring for unwanted or abused dogs or cats.

“Animals are dear to my heart,” said Weems, who helped establish and run the Oxford Lafayette Humane Society in the 1970s, when she lived in Oxford.

“I knew a student who was entering Ole Miss who had rescued two dogs and she told me she was going to miss her pets,” Weems said. “I wanted to create a scholarship for someone like this student, someone who is kind to those who can’t take up for themselves.”

Although Weems is well known among pet lovers in Oxford and Jackson for rescuing and fostering scores of dogs and cats over the years, she is more widely known for her artwork. A collection of more than 100 of her paintings, titled “Mostly Mississippi,” is currently in bookstores.

Published by Quail Ridge Press of Brandon, the book is the result of a show by the same name that hung in the University Museum in 2006 at the invitation of UM Chancellor Robert Khayat. Weems said that she will donate some proceeds from the book to the newly established scholarship.

“We are profoundly grateful to Miriam Weems for this unique opportunity to help students,” said Glenn Hopkins, dean of the College of Liberal Arts. “We strive to attract the best and brightest students and no doubt many of them care deeply for animals.”

Weems noted that her husband, Tommy, and UM Professor Emeritus of English Chuck Noyes, who recently passed away, also contributed to the endowment fund. Others interested in contributing may make checks payable to the UM Foundation/Weems Pet Lovers and remit to the Foundation at 406 University Avenue Oxford, MS 38655. Gifts may also be made online at www.umfoundation.com/makeagift.

Weems’ gift is part of the university’s MomentUM campaign, a four-year initiative to raise $200 million. Funds raised through the campaign, which ends in December 2008, will support scholarships, graduate fellowships, faculty support, a basketball practice facility, residential colleges and a new law school on the Oxford campus. Also in the plans are a cancer center at the UM Medical Center and a new building to house the School of Pharmacy, both in Jackson.