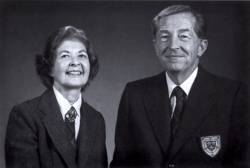 OXFORD, Miss. – Throughout his life, University of Mississippi alumnus Clarence Thomas Hill, Jr., had a hunger for knowledge and a dedication to education. That dedication continues to live on through his bequest of $1.4 million to the university.
Hill’s nephew, Julian Hill, Jr., an oncologist in Tupelo, remembers his uncle as a man who valued education. “He thought of his life as a lifelong educational project,” the younger Hill said. “He had a tremendous personal library. We could have conversations on just about anything.”

The money from Hill’s estate will establish the Dorothy Palmer Landrum and C. Thomas Hill, Jr., M.D. Endowment, which will create scholarship opportunities for Ole Miss students in both the College of Liberal Arts and the University of Mississippi Medical School in Jackson.

“When it came to the end of his life, he wanted to do something to help others,” Julian Hill said. He came from a pretty poor family. He had to borrow money to educate himself. He was very much a self-made man and he accomplished a lot. It’s fitting that he took some of the money he made to create scholarships.”

The $1.4 million will be split evenly between the College of Liberal Arts and the Medical Center since Hill attended classes in each.

“Scholarship support remains a priority for the university and the college as we continue to attract and retain the highest caliber students,” said Glenn Hopkins, dean of the College of Liberal Arts. “We are grateful for this gift and especially pleased that it will provide support for deserving students.”

As a former deserving student, the elder Hill carried with him a very fond affection for the university. Hill and his wife lived in married student housing while at Ole Miss and they recalled it as one of the happiest times in their lives, remembers Julian Hill. The elder Hill was committed both to the university and to his chosen field of medicine.

“Lives will be changed through this gift,” said Dan Jones, vice chancellor for health affairs and dean of the School of Medicine. “Medical students will have the opportunity to choose a practice type and location with less burden of financial debt.  And communities in Mississippi will benefit from having well trained physicians to provide compassionate care.”

A native of Corinth, Hill was born in 1919 and graduated high school in Corinth in 1937. It was his lifelong dream to become a pilot, and after high school he enrolled in Northwest Mississippi Community College in Senatobia to take the courses necessary to join the U.S. Army Air Corps. In 1940 Hill entered the Army Air Corps and earned his wings.

When Hill had to leave the Army a year later due to medical complications, he took a job as a private flight instructor in Ponca City, Okla. It was there that he met his wife, Dorothy Palmer Landrum, a Ponca City native. The couple married in 1945.

Hill’s work at the private flight school in Ponca City led to a job training pilots for Great Britain’s Royal Air Force. He was given a commission with the RFA and flew transports between Africa and England, and England and the U.S. Part of his job was flying home the wounded, which piqued his interest in medicine.

After the war, he and Dorothy moved to New York City, where he worked as a pilot for American Airlines, which was based there the time. After one particularly rough landing in snow and ice at Chicago’s O’Hare airport, Hill vowed to his brother, Julian Hill Sr., that he would never fly again. It was then that he came to Oxford, where his brother was already a student, to begin his medical education.

Hill earned a medical certificate from UM in 1951. He then went on to earn his medical degree from the University of Tennessee in 1952. He was a fellow in radiology and nuclear medicine at the University of Texas South Western School of Medicine. He practiced radiology in Clovis, New Mexico, until he retired and returned to Ponca City with his wife after she fell ill. He died in 2007 at age 87.

Hill’s gift is part of the university’s MomentUM campaign, a four-year initiative to raise $200 million. Funds raised through the campaign, which ends in December 2008, will support scholarships, graduate fellowships, faculty support, a basketball practice facility, residential colleges and a new law school on the Oxford campus. Also in the plans are a cancer center at the UM Medical Center and a new building to house the School of Pharmacy, both in Jackson.