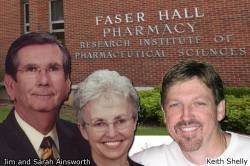 Two loyal pharmacy grads, Jim Ainsworth and Keith Shelly, have each committed $50,000 to support the School of Pharmacy.

Ainsworth, who graduated in 1967, is vice president of regional operations for Baptist Memorial Health Care based in Memphis, Tenn., and also currently serves as CEO of Baptist Memorial Hospital-North Mississippi in Oxford, Miss. He has worked in the Baptist system for nearly 40 years, beginning his career as a pharmacist there in 1969.

“I feel all of us have an obligation to contribute to the education of future health care professionals,” Ainsworth said. “It is no longer realistic to think that public dollars will be sufficient to cover the health care workforce needs of the future.”

The gift from Ainsworth and his wife, Sarah, also a UM grad, will support construction of the new pharmacy building in Jackson.

“We also wanted to support the University because our benefits as students laid the foundation for outstanding professional as well as personal careers,” he said.

Besides Sarah, who earned both her bachelor’s and master’s degrees from Ole Miss in 1965 and 1966, respectively, the couple’s two daughters, Rebecca McGee and Debra Ottens, are also UM alumnae, with Rebecca earning a pharmacy degree in 1991.

Shelly, who graduated in 1978, owns Donelson Drug Mart, a pharmacy in Nashville, Tenn. He also serves as the Director of Pharmacy for Centerstone Community Mental Health Centers, located throughout mid-Tennessee. He says that although he returned to his native Tennessee after graduating from Ole Miss, he never forgot the good times, friendships and value of his education from his time in Oxford. His gift will create the J. Keith Shelly Conference Room in Faser Hall.

“The University of Mississippi is among the nation’s leaders in promoting excellence within our profession by providing quality instruction to its students and by prioritizing research goals,” Shelly said. “I am proud of that fact and recognize that maintaining this standard requires the emotional and financial support of those who have already benefited from this great institution. I am pleased to be able to contribute to the School of Pharmacy to promote its growth, particularly as the School celebrates its 100th year.”

Besides Shelly, his two daughters have Ole Miss ties. Karah earned an MBA and Kalyn is currently attending.

Both gifts are part of the School’s Promises to Keep Campaign, a five year initiative to raise $5 million in private support. Of the money raised, $2.5 million will help construct a pharmacy practice building on the UMMC campus in Jackson; $1.5 million will provide the scholarship support necessary to attract the most promising students and lessen the burden of students with financial constraints; and $1 million will provide faculty support through an endowment to attract and retain the best and brightest professors, clinicians and researchers from around the globe.