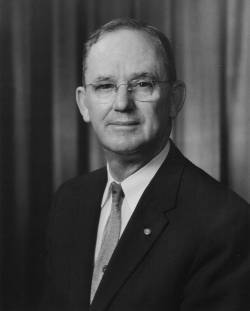 OXFORD, Miss. – To honor the memory of his father, a longtime public school administrator, University of Mississippi alumnus Joseph C. Todd of Cincinnati has created the Lindsey O. Todd Scholarship Endowment at his alma mater with a gift of $100,000.

The elder Todd, who died in 1973, dedicated his life and career to improving public schools in Mississippi.

Scholarship recipients are to be from Newton County with first preference given to those pursing a degree in the School of Education, including those being trained in the Mississippi Principal Corps, a program designed to better train the state’s school principals.

"My father was an energetic man with an inquisitive mind whose passion was public service," Joseph Todd said. "He held the basic belief that education was the key to opportunity, personal fulfillment and societal progress. He did not complete a degree at Ole Miss, but he was always mindful of the importance in his life of having had the opportunity to attend his state’s university. I know he would be proud and honored to have a scholarship bear his name."

Lindsey Todd, a farm boy from Newton County, enrolled at Ole Miss in 1919 but was unable to return after his sophomore year because of his father’s terminal illness. He accepted a job as principal of a school in western Kemper County, beginning a 49-year career as a school administrator.

During summer sessions, he completed his education, earning a bachelor’s degree from George Peabody College for Teachers, a master’s degree from Columbia University Teachers College and a Ph.D. from Peabody. His doctorate was the second in the state earned by a Mississippi public school administrator.

"Dr. Lindsey Todd was one of Mississippi’s most inspiring and effective leaders in the field of public education," said former Gov. William Winter. "In all of my years in public life, there was no educator for whom I had more respect or whose friendship I cherished more. I first met him when he was the commencement speaker at my graduation from Ole Miss in 1943. I was inspired by his words then and by his leadership in all the years that I was associated with him thereafter. Every present-day Mississippian owes Dr. Todd a huge debt of gratitude for his unceasing battle for public education in this state."

Joseph Todd’s gift is part of the university’s MomentUM campaign, a four-year initiative to raise $200 million. The campaign, which ends in December 2008, already has raised more than $180 million for scholarships, graduate fellowships, faculty support, a basketball practice facility, residential colleges and a new law school on the Oxford campus. Also in the plans is a cancer center at the UM Medical Center in Jackson.

For more information on making a gift to the University of Mississippi, visit http://www.umf.olemiss.edu/giving.