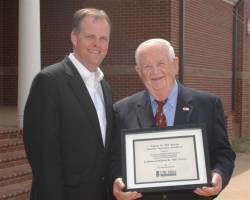 OXFORD, Miss. – The employees of Bryson & Company Insurance, headquartered in Ridgeland, have honored the company’s past president, Bill Bryson, by creating the William M. “Bill” Bryson Fund for Insurance Excellence at the University of Mississippi.

Seeded with a gift of $25,000 from Bryson & Company, the fund will support faculty in UM’s Risk Management and Insurance Department in the School of Business Administration, of which Bryson is an alumnus. Bryson earned his degree in1949 and was a member of the first class to graduate with a major in insurance after Ole Miss added the program to its curriculum in 1947.

Bryson’s son, Sam, the current president of Bryson & Company, along with other owners and employees, surprised him with the gift at the 2008 Ole Miss Insurance Symposium, held March 25-26 at the University of Mississippi.

“I was completely surprised. It was something I hadn’t even considered,” Bryson said. “It was a generous act on their account. I sincerely appreciate what they did for me and for the young people preparing themselves to enter the insurance industry.

Sam Bryson said he and the other owners and employees wanted to do something special to honor Bill Bryson, who has been with Bryson & Company since 1971, when he joined the three person agency then known as Guy Bailey Insurance.

Bryson & Company is now one of Mississippi’s largest independent insurance agencies. Founded in 1959, the company has a long history of growth and success. In 1993, Bill and Sam purchased the agency outright and began broadening the range of insurance services offered. The company has offices in Hattiesburg and Canton as well as Ridgeland.

“We are deeply grateful for this gift from Sam Bryson and Bryson & Company,” said Larry Cox, chair of the Risk Management and Insurance program. “Bill Bryson has dedicated his career to this industry and this is a fitting way to honor him. I know I can speak on behalf of all of our Risk Management and Insurance faculty when we say we are so appreciative for the support and generosity from the Bryson family and Bryson employees.”

Since graduating from UM, Bryson, a Friars Point native who now lives in Clinton, has remained in close touch with the Ole Miss Risk Management and Insurance Program by serving on its advisory committee. He was active in the National Association of Professional Insurance Agents, where in addition to service on its board of directors, he served as vice president. He also served as president of its state association. During his lifelong career in the insurance industry, Bryson served for 36 years in the United States Army and Army Reserve, being called up for active duty during WWII and the Korean War, and retiring in 1989 with the rank of Colonel.

The Bryson family has a long tradition with Ole Miss. Bryson’s father, L. L. Bryson, graduated from UM in 1922, and of Bryson’s three children, two have direct ties to Ole Miss. Kathy Bryson Cook, of Rome, Ga., graduated from UM’s School of Business Administration in 1970 and Janet Bryson Flint, of Batesville, is currently attending Ole Miss.

The gift is part of the university’s MomentUM campaign, a four-year initiative to raise $200 million. MomentUM, which ends in December 2008, already has raised more than $180 million for scholarships, graduate fellowships, faculty support, a basketball practice facility, residential colleges and a new law school on the Oxford campus. Also in the plan is a cancer center at the UM Medical Center in Jackson.

To learn more about the Risk Management and Insurance program, visit http://www.olemissbusiness.com/insurance.