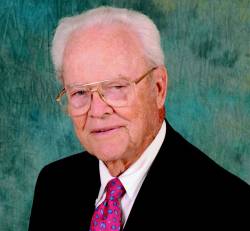 University of Mississippi alumnus Lucian S. Minor of Memphis has established a trust of $1 million to benefit the university’s Patterson School of Accountancy.

A longtime donor, he established the Lucian S. Minor Endowment in 1996 to benefit the accountancy school, and this latest gift will add to the school’s growing endowment.

"Many of the courses that I took at Ole Miss contributed to my success in the business world, particularly in the accounting field," Minor said. "I’m glad to share some of my success with Ole Miss. Hopefully some needy students will benefit from my contribution."

The gift, his second Charitable Remainder Annuity Trust, allows Minor and his wife, Mary, to receive interest income from the trust during their lifetimes. The remainder of the trust will ultimately be incorporated into the endowment.

We are tremendously grateful to Lucian and Mary Minor for their generosity to the School of Accountancy and their loyalty to Ole Miss," said Wendell Weakley, president of the University of Mississippi Foundation. "We are especially thrilled about this gift since it not only benefits Ole Miss but also provides many benefits to these wonderful supporters of our university."

A Charitable Remainder Annuity Trust not only allows for annuity payments to the donor and spouse for life, but it also can provide for significant tax benefits. Since this type of trust is not subject to capital gains or estate taxes, it’s an attractive option for individuals wishing to make a large charitable gift and retain the benefits of an annuity.

The gift is part of the university’s MomentUM campaign, a four-year initiative to raise $200 million. MomentUM, which ends in December 2008, already has raised more than $160 million for scholarships, graduate fellowships, faculty support, a basketball practice facility, residential colleges and a new law school on the Oxford campus. Also in the plan is a cancer center at the UM Medical Center in Jackson.

The Lucian S. Minor Endowment fund was established to provide income support for academics in the School of Accountancy. The money provides scholarship assistance for deserving students who are pursuing a degree in accountancy, support for a lecture series in the school and other academic needs. When the remainder of the trust is added to the endowment, administrators in the accountancy school plan to use the funds to help create a permanent endowed faculty chair.

Faculty support is critical to helping the Patterson School maintain its status as a Top 25 accounting program in the Unites States.

"Lucian Minor is a longtime supporter of the Patterson School of Accountancy and has been one of our most faithful supporters over the years," said Mark Wilder, interim dean. "We are so grateful for his loyalty and generosity. This gift from the Minors will benefit our school in countless ways. It will significantly impact both faculty and students and make our program even stronger." Minor, who graduated from Ole Miss in 1937, is a financial consultant and retired accountant. He worked for General Mills Inc. in Minneapolis, where he was assigned to the internal audit staff and worked in more than 25 of the company’s largest offices across the country.

After four years of service and his discharge from the Navy in 1946 as a lieutenant commander, he began his own accountancy firm in Memphis, which merged with Ernst & Ernst (now Ernst & Young). He became partner-in-charge of the Memphis office after the merger and held the post until retiring in 1978.

"Lucian Minor gave me my first job at Ernst & Ernst after I graduated from the Patterson School of Accountancy at Ole Miss," said Larry Hardy, a longtime friend of Minor’s who was inducted into the school’s Alumni Hall of Fame in 2006. "He’s been a wonderful friend and mentor and has made an impact on my life and career. This recent gift from him shows his continued support of Ole Miss students and faculty, which I think is truly wonderful and inspiring."

For information about the Patterson School of Accountancy, go to

For more information on the MomentUM campaign, go to