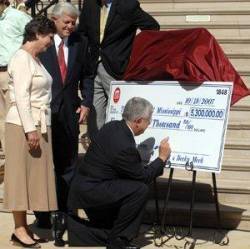 OXFORD, Miss. – Thanks to the generosity of alumni Ed and Becky Meek, the University of Mississippi plans to ask the Board of Trustees of State Institutions of Higher Learning to approve the creation of a new School of Journalism, Marketing-Communications and Technology.

The new school will focus on the future of journalism and communications with an emphasis on technology and its impact on society, a unique approach to journalism education among the nation’s institutions of higher learning. The Meeks have provided $5.3 million for the school’s initial funding, university officials announced Friday morning.

For 37 years, Ed Meek helped shape the university’s public image, retiring in 1998 to focus on other business interests.

"We are inspired by the generosity of Ed and Becky Meek," said Chancellor Robert Khayat. "They are longtime friends of Ole Miss, and we are grateful for their continued support. The Edwin Meek school will create unprecedented opportunities for our journalism students, as well as provide national leadership."

The Department of Journalism’s graduates rank among the nation’s top communications professionals and hold key positions at The Boston Globe, USA Today, The New York Times, CNN, Fox News and virtually every television station and newspaper in Mississippi.

"Becky and I feel we owe the university so much," Meek said. "We are delighted to be able to repay Ole Miss a very small part of the very large debt our family owes for the great opportunities this university has given to three generations.

"The concept for the school is so exciting. It’s going to create an academic program in journalism that stays ahead of the curve, looks into the future and returns to the curriculum an interdisciplinary approach that will give students a wide range of options."

The new school will benefit students in countless ways, said journalism department Chair Samir Husni. "This is a giant step forward," he said. "A school devoted specifically to journalism puts us on the same playing level as other universities in the nation."

The school is to be housed in newly renovated Farley Hall, also home to the Overby Center for Southern Journalism and Politics.

A UM journalism graduate, Meek is a former assistant vice chancellor for public relations and marketing and associate professor of journalism. He got his first taste of journalism working after school at The Mississippi Sun in Charleston. Encouraged by Sun editor W.W. "Bill" May, he became editor of his high school newspaper and discovered journalism was his calling.

High school sweethearts, Ed and Becky married in June 1960 and drove to Oxford in a beat-up ’49 Plymouth they bought for $400. They spent their wedding night in married student housing.

"I had a final exam at 8 the next morning and the professor would not let me reschedule the exam for our wedding," he said. Both Ed and Becky were the first in their families to attend college.

"I was near the bottom of my high school class," he said. "I had no business going to college, but a couple of high school teachers and Ole Miss professors took an interest in me and encouraged my development. I ultimately became an ‘A’ student."

To pay his way through school, Ed worked as a freelance writer and photographer for UPI and such regional newspapers as The Birmingham News, The Clarion-Ledger and Commercial Appeal. In 1961, when he earned his Bachelor of Science in Journalism, which combines journalism and business courses, his work had already appeared in Time, Life, and other national publications. He earned a master’s degree in liberal arts with an emphasis in journalism from UM in 1963 and later earned a doctorate in communications from the University of Southern Mississippi.

While he was in college, Becky operated a local business. She earned her bachelor’s degree in education in 1966 and her master’s degree in special education in ’67. After teaching briefly at UM and Oxford City Schools, she worked for 28 years at Oxford’s Mental Health Center, now Communicare. In 1962, Ed took a job as staff writer in the university’s public relations office. Two years later, at age 24, he became UM’s youngest department head ever and faced the task of rebuilding the university’s image after the violence associated with James Meredith’s enrollment.

In 1987, Ed founded the Tupelo Furniture Market, which quickly became a major economic resource for north Mississippi. At UM, he also helped create the Small Business Development Centers in each state and created and produced "Mississippi Business Today," an educational television program that focused on Mississippi businesses and entrepreneurs. He and three other faculty members put together the proposal for the university’s Cultural Center, which includes Rowan Oak, home of William Faulkner; the University Museum and Historic Houses; and the Ford Center for the Performing Arts.

He helped organize Mississippi’s chapter of Sigma Delta Chi, an honor society for journalists, and is a fellow of the American Council of Education. The author or co-author of several books, he received the Governor’s Distinguished Mississippian Award and other honors.

The Meeks’ daughters, Cindy Sinervo and Kellye Houston of Oxford, are both Ole Miss alumnae. Two of their grandchildren, Kate Sinervo and Hillary Houston, are attending UM, and the Meeks hope their remaining grandchildren, Meg Sinervo and Jake and Hale Houston, continue the family tradition.