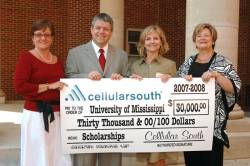 OXFORD, Miss. – Cellular South, one of Mississippi’s largest companies, continues its legacy of giving with a $30,000 contribution to the University of Mississippi School of Business Administration.

The gift is part of the Jackson-based wireless communications company’s commitment to providing annual scholarships to all public universities.

Half the $30,000 goes toward the Cellular South endowment at UM to fund future scholarships. The other half provided scholarships to five students pursuing business degrees: John Graham Doty of Oxford, W.C. Lee’Allen Keys of Ecru, Michael Allen Reid of Southaven, Lee Hubert Thompson III of Marks and Shanika Starr Young of Horn Lake.

To receive the $3,000 award each academic year for four years, the students must demonstrate good campus citizenship by being involved in community service or extracurricular activities. Recipients are Mississippi residents with a minimum ACT score of 28 and at least a 3.0 GPA.

"The Cellular South scholars are all well-rounded students who have excelled in the classroom, in school leadership positions and in community service projects," said Brian Reithel, dean of the business school. "It’s gratifying to see that these students share an excitement about pursuing a business degree and a belief that Ole Miss can offer them the skills they will need to be successful."

Doty is majoring in marketing communications. He was selected by his peers to serve on the student recruitment team for the business school and is on the Chancellor’s Honor Roll. He graduated from Oxford High School.

Keys is a business major who describes himself as a "disciplined student and one who works hard to achieve the greatest grades possible." He graduated from Ingomar Attendance Center.

Reid is majoring in management. He is a member of the National Honor Society and received the Desoto Central High School Leadership Award. He graduated 11th in his class at Desoto Central.

Thompson is majoring in banking and finance. He graduated first in his class at Delta Academy and was the recipient of the President’s Award for Academic Excellence.

Young, a member of the Chancellor’s Leadership class, is the first member of her family to attend college, which she says provides her the incentive to excel academically. She graduated ninth in her class at Horn Lake High School.

Cellular South places an emphasis not only on funding these scholarships but also on its relationship with the recipients, who are eligible to participate in a summer internship with the company to gain firsthand knowledge about the wireless industry and the business world.

"At Cellular South we look at our educational initiatives and monetary awards as more than just funding scholarships," said Amy Nash, the company’s public relations specialist. "Helping someone achieve a college degree is a gift that keeps giving not only to the scholarship recipient but to the community, the state and the nation in which that person resides."

Founded by a UM graduate, Cellular South is a leader in wireless voice, data and mobile commerce products and employs approximately 900 people in the metro-Jackson area.

For more information on giving to scholarship programs at UM, go to http://www.olemiss.edu/giving/