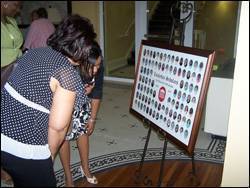 Atricia White (right) and her mother, Mary White, look over the class photo of the 2007 Luckyday Scholars. White served as a peer leader for the Luckyday Program for the past three years.

Largely due to one man’s commitment nearly three decades ago, 92 scholars from around the state were among the University of Mississippi’s more than 2,100 candidates for graduation at spring commencement.

The students completed their undergraduate education as recipients of Luckyday Scholarships. UM Provost Carolyn Staton said accomplishing the task may not have been possible for some of these scholars had it not been for the foresight and generosity of the late Frank Day, who graduated from UM in 1953. In 1978, Day established the Luckyday Foundation to help young Mississippians achieve their educational goals.

Barbara Day, widow of Frank Day, attended a recent reception at UM for the graduating class of Luckyday Scholars and Luckyday Foundation board members.

"We are so proud of our 2007 Luckyday graduates," said Barbara Day. "They have been successful both in their academic and personal achievements during their college years, and we wish them well. We hope they will spread the word about Luckyday Scholarships to other worthy students as they go forward in their careers."

The Jackson-based Luckyday Foundation has provided annual scholarships to UM freshmen since 2001. Over the last six years, the foundation has awarded more than $10.5 million to nearly 1,000 students.

The scholarship opportunity made the mother of Luckyday scholar Hunter Howell especially happy. Marijean Howell of Oxford said her son, candidate for a bachelor’s degree in chemical engineering, probably would have moved away and attended either Rice University or Georgia Tech University had it not been for the Luckyday Scholarship.

"The scholarship draws students to Ole Miss who may not have otherwise chosen to come here," Howell said. "We’re definitely thankful for the Luckyday Foundation."

Luckyday Scholar Reshika Coleman of Preston, candidate for a bachelor’s degree in nursing, said, "I ultimately believe that behind every success is ambition, behind every ambition is effort and behind every effort is someone who is willing to try. The Luckyday Foundation was that someone willing to try, resulting in my success."

Day received his bachelor’s degree in business from Ole Miss, then completed the graduate school of banking at Louisiana State University. He served as chairman of the board and CEO of Trustmark National Bank before his death in 1999.

For information about the Luckyday Opportunity Scholarship program and other financial opportunities at UM, visit http://www.olemiss.edu/depts/financial_aid