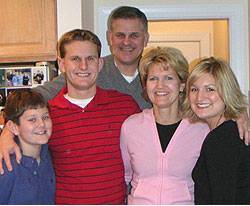 Bill Warren of Fairfax, Va., president of BamBams LLC, has visited the University of Mississippi only once since graduating in 1979.

"Business keeps me away from Mississippi," Warren said. "That’s the problem."

He found a simple solution to that problem by recently seeding the USS Swordfish Ole Miss First Scholarship.

The USS Swordfish, a U.S. submarine during World War II, disappeared near Okinawa, Japan, along with its 89 crew members, in early 1945. Warren’s father was attached to the sub, but because of an injury was not deployed when it vanished.

Warren suffuses his remarks with the honest good humor of someone who learned early that life is fickle and that, except for a minute detail here or there, things could be vastly different.

"My dad grew up on a dirt farm in Alabama," he said. "He went into the Navy because his family couldn’t feed him. My dad, Bill Sr., passed away in 1990, so when I was thinking about making a donation, I said, ‘How about commemorating those young guys on the Swordfish who never got a chance to live the life that they were fighting for?’"

The first recipient of the USS Swordfish Scholarship is Sharita Washington of Roxie, a town of some 800 people between Brookhaven and Natchez. (Roxie’s most famous son is the African-American author Richard Wright, who was born there in 1908.) Washington, a freshman biology major who has planned for some time on being an emergency room doctor, had intended to go to Mississippi College.

"Then a dean called me and told me about a new Ole Miss First scholarship, I had a phone interview and they sent me a letter and said I’d gotten it," she said. "So, I think two weeks before school started, I found out about the scholarship and changed my mind."

Washington’s father is a preacher; her mother works in a restaurant. She has two younger brothers, one of whom is adopted, and a sister in college. "We’re a regular family," she said.

Enrolled in UM’s Sally McDonnell Barksdale Honors College, Washington said she likes it because the classes are small, the computer lab is open 24 hours and the people are "a good group."

It’s great to have received the USS Swordfish Scholarship, she said, because otherwise she would not have been able to attend Ole Miss’ esteemed honors college.

Warren grew up in Atlanta, where his father sold cars and his mother was head of payroll and the highest-ranking woman in a 26,000-strong labor force at the Southern Company.

"Because of the glass ceiling at the time, she couldn’t go any higher," he said, adding that this is one reason he is thrilled that Washington is the first recipient of the scholarship, and another is that his father never attended college. "Because of my dad, I’m especially happy that this scholarship was awarded to someone who would have never had a chance to go to Ole Miss otherwise," he said.

http://www.bambams.com/public says, "anywhere crowds gather," in addition to other such fan items.

Warren’s family includes his wife Cindy, daughter Jennifer, a graduate of College of the Holy Cross who works for Teach for America, and two sons: Billy, a sophomore at Tulane, and Joe, 12.

"My kids are very good students," he said. "I never could figure that out."