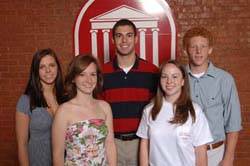 Fourteen outstanding high school graduates from Mississippi, Alabama, Louisiana and Tennessee have been chosen to receive prestigious scholarships from the Sally McDonnell Barksdale Honors College at the University of Mississippi.

During the freshman year, students in the Honors College take interdisciplinary courses not offered elsewhere at the university – classes that expose them to critical thinking in the sciences, humanities, arts and social sciences.

In addition, the students take honors sections of courses in various disciplines to fulfill hours in their majors or to meet general requirements. Honors students also work under the guidance of a professor on a significant research project that produces an honors thesis in their senior year.

Callahan attended Ocean Springs High School, where she ranked first in a class of 377. She was a finalist in EL Publisher’s National Essay Contest and a longtime volunteer at the Walter Anderson Museum. She plans to major in international studies.

Donnell, a National Merit Finalist, attended St. Joseph Catholic School and served as captain of the cheerleading team. She was a Mississippi Governor’s School Scholar and first in her class of the Rural Medical Scholars Program. She plans to pursue a career in medicine.

Magee, a National Achievement Finalist, was senior class president and president of the Beta Club and Health Occupations Students of America at Perry Central High School. A participant in the Hugh O’Brien Youth Leadership Program, he plans to major in mathematics.

Maher graduated from Gulfport High School, where she was class valedictorian and president of the National Honor Society. She attended UM’s Lott Leadership Institute for High School Students and Mississippi Governor’s School. She plans to major in biology.

Stephenson, a National Merit Finalist, attended Madison Central High School. He was president of the Mu Alpha Theta mathematics society, a STAR Student and a four-year member of the marching and symphonic bands. He plans to major in mathematics.

Smith, a National Achievement Finalist, is a graduate of North Panola High School. She graduated at the top of her class and was selected homecoming queen. A peer tutor throughout high school, she plans to major in business.

Applewhite was a National Merit Finalist. She attended Jackson Preparatory School, where she was a Furman Scholar and National French Award winner, placing fourth in the nation. A longtime volunteer at the Blair E. Batson Children’s Hospital and other programs, she is undecided on a major.

Cotten attended the McCallie School in Chattanooga, where he was a recipient of the Trustee Merit Scholarship. He was a member of the school’s tennis and climbing teams and a musician. He plans to major in English.

Hailey was a National Merit Finalist. She attended Muscle Shoals High School, where she graduated at the top of her class. She participated in the Early Scholar Program of the University of North Alabama-Florence and in the Alabama Governor’s School. She has chosen chemical engineering as her college major.

Halbrook attended Cedar Creek School, where she received the Office of Naval Research Award at the Regional Science Fair. She participated in the Louisiana Girls State and the Hugh O’Brien Youth Leadership Program. She plans to major in mathematics.

MacNeill, a National Merit Finalist, attended Ridgeland High School. He was a STAR Student and salutatorian in a class of 200. His activities included serving as president and district governor of Mu Alpha Theta. A nominee for Wendy’s Heisman Award, he is considering a major in engineering.

Peel attended Pope John Paul II High School, where he was a Wendy’s Heisman nominee and winner of highest honors on the National Latin Exam in the National Junior Classical League. A student government representative and volunteer in many service opportunities, he plans to major in pharmacy.

Recipients of the Harold Parker Memorial Scholarships are Lauren Elizabeth DeLap of Greenville and Claire Elizabeth Graves of Ackerman.

DeLap, a National Merit Finalist, attended St. Joseph High School, where she was the Student Government Association president and homecoming queen. A participant in Mississippi Governor’s School and volunteer for many organizations, she plans to major in political science.

Graves attended Ackerman High School, where she was class salutatorian and senior class president. A member of the band and choral groups, she also won the Four County Leadership Forum and attended UM’s Lott Leadership Institute for High School Students. Graves has not decided on a major.