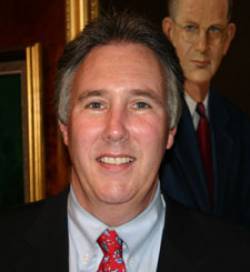 OXFORD, Miss. – Two traditions run deep in the family of Robert Gage IV: banking and attending the University of Mississippi.

Gage’s love for his alma mater and his desire to share the rewards of a successful career in banking have inspired him to pledge $25,000 to establish a scholarship in the Ole Miss First Scholars program.

"Our family has been in the banking business for almost 100 years, and it feels nice to have the scholarship in his honor," said Gage, who holds bachelor’s and law degrees from UM.

Although this is the first scholarship to bear the Gage name, the family is not new in pledging support to Ole Miss. Gage, CEO of Riverhills Bank in Port Gibson, is a member of the Lamar Order, part of the Law Alumni Chapter of the UM Alumni Association and the highest level of giving among law alumni.

Ellen Rolfes, director of the Ole Miss First Scholars program, said that alumni such as Gage are essential to the university.

"What a pleasure to have met Robert on a summer’s day in Port Gibson to learn of his family’s fourth generation in banking, his deep love for Ole Miss and, most of all, his strong belief in education," Rolfes said. "He is the essence of Ole Miss First – a family matter."

The Ole Miss First Scholarships are unique in that each one allows the donor to participate in a mentor program with recipients. This added support was part of the reason Gage decided to join the program.

"This is a great program that Chancellor Khayat has put together," Gage said. "By combining the mentorship in with the financial support, it’s giving the students a huge advantage. Now they can have someone in the business world to help guide them through their classes and into a future career."

This guidance can be the difference in success and failure, Gage said, adding that he would have loved such a program when he attended the university.

"It would have meant a lot to me to have someone there like this program provides," Gage said. "Students don’t have the maturity level yet to face the business world; they just aren’t as prepared. But this scholarship allows them to have someone to shelter them through and show them the way."

Gage graduated from the Ole Miss business school in 1976 with a bachelor’s degree in banking and finance. He obtained his law degree in 1978. His wife, Jacquelyn, holds a liberal arts degree from Ole Miss, as does their daughter, Virginia, who works in Washington, D.C.

"Our son Robert is only 13, but he also loves Ole Miss, so we’ll likely have another graduate from the university," Gage said.

For more information about Ole Miss First and other giving opportunities at UM, visit http://www.olemiss.edu/giving/omwc/giving.htm.

For more stories from the University of Mississippi, visit http://www.olemiss.edu/newsdesk.