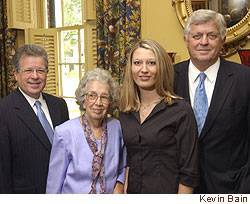 OXFORD, Miss. – A Batesville attorney is recognizing his mother’s unselfish devotion to her family and lauding the University of Mississippi’s support of her by endowing an Ole Miss First Scholarship in her honor.

Doris Phillips, 81, of Batesville taught at UM for more than 20 years before retiring in the early 1990s. She holds four degrees from Ole Miss, and her other three children also earned degrees on the Oxford campus.

"Ole Miss has been such an important part of mother’s life and so good to her after our father’s death," said Phillips.

The decision to begin teaching at UM as a graduate assistant in 1971 didn’t come easy for Doris Phillips. The unexpected death of her husband, Richard S. Phillips, prompted her at age 49 to become the family breadwinner for their four children after years spent as a homemaker and part-time student.

The Phillips Scholarship is designated for students who seek to resume their studies after circumstances interrupt their education, and like all Ole Miss First Scholarships, it is awarded based on academic excellence, leadership ability and financial need.

The scholarship’s first recipient is Victoria Sanders, a junior biology major from Southaven who graduated from NWCC in 2003 with a 4.0 grade point average, the highest in her class. Sanders took a year off from school in 2003-04 to help parent her 16-year-old sister.

"That shows a commitment, to want to return to school," said Richard Phillips, who accompanied his mother on a recent visit to the Oxford campus.

The visit prompted Doris Phillips to reminisce about times when she and her late husband attended many Ole Miss sporting events together. He was one of the first salesmen to work for Dunlap & Kyle tire company in Batesville.

"Those were good years; I thoroughly enjoyed them," said Doris Phillips, a 1940 graduate of Sardis High School.

The occasion also allowed the Phillipses to meet Sanders, who said she was gratified to be able to let them "really know how grateful I am." She is one of 12 UM students named as 2004-05 recipients of Ole Miss First Scholarships.

The scholarships were created in 2001 as the result of Chancellor Robert Khayat’s desire for the Ole Miss "family," including alumni, faculty, staff and friends, to provide scholarships for deserving Mississippi students.

"We hope our members will continue to serve a mentoring capacity to all scholarship recipients, which is part of the uniqueness of the Ole Miss program," Rolfes said.

For more information about the Ole Miss First Scholarship program, visit http://www.omfirst.olemiss.edu/scholars, e-mail Rolfes at erolfes@olemiss.edu or call the UM Foundation at 662-915-5944.