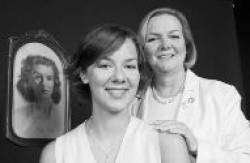 Margaret Bardwell and her mother, Patsy Brumfield, with grandmother’s photograph

Anew $100,000 Ole Miss Women’s Council Scholarship comes from an unlikely source: a senior engineering major who has paid her own way through college.

Usually considered out of range for a typical college student, this philanthropy is possible for honors student Margaret Bardwell through the option of a life insurance policy naming the university as beneficiary.
Coming from the tradition of outspoken, independent women, Bardwell not only asserts her independence by establishing the scholarship but also chooses to honor her mother, Patsy Brumfield of Tupelo, Miss., and her maternal grandmother, the late Betty Jane Dial Brumfield of McComb, Miss. — both respected newspaper journalists.

“I thought, ‘Why not? I’m 21 years old — insurance payments are not going to be expensive,” says Bardwell, who enters a prestigious U.S. Navy early-entry engineering program upon her 2005 graduation from Ole Miss.

When telephoning her mother with the news about the endowed award in her honor, Bardwell says, “It was the one time I can think of that Patsy was left speechless.”

“I teared up and all that stuff,” says Brumfield, a UM journalism graduate and Northeast Mississippi Daily Journal news editor. “Margaret’s full of surprises — generally, good ones.

“It’s pretty amazing for someone her age to really care whether anybody else is helped through college,” Brumfield says. “Margaret went through on full scholarships. She hasn’t had any expenses and realizes how fortunate she was. I think she just wanted others to have the same opportunities she did.”
The scholarship won’t go into effect until after the university benefits from the policy. Bardwell is the third UM student to endow a scholarship with a life insurance policy, which costs her $50 a month — close to the amount she might spend each week on “silly stuff” at a discount store.

“I think financing someone’s education would be more worthwhile,” she says.
Ole Miss Women’s Council scholarship recipients, both men and women, are assigned individual mentors from the university community to guide the students along their career paths, as well as benefit from leadership training. After graduation, each scholar is expected to pledge a modest amount to the Women’s Council for at least five years to reseed the program.

When the Bardwell, Brumfield and Dial Council Scholarship is awarded, first preference goes to a UM student majoring in engineering and second preference to a student majoring in journalism. Bardwell is one of two UM students — both women — selected as officer candidates in engineering with the U.S. Navy. She serves as the vice president of UM’s engineering student body and president of the campus chapter of the Society of Women Engineers.
Individuals, organizations and corporations interested in Women’s Council Scholarships can contact Ellen Rolfes at (662) 915-5944 or 800-340-9542 or e-mail umf@olemiss.edu.