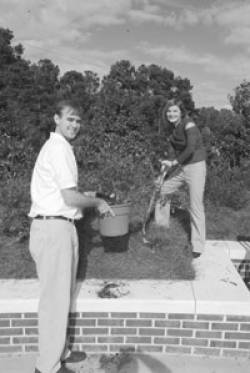 W hen Prescott “Peck” Sherman attended Ole Miss during the Depression, he held down several jobs: one, a morning paper route, which was early enough not to interfere with his classes; and another at a local clothing store that enabled him to buy his own clothes. The third job, which was cleaning the cement lab in the School of Engineering where he was enrolled, paid his meal ticket.
During his junior and senior years, Sherman served as business manager for the Mississippian, the school newspaper; and last, but not least, he delivered flowers for a local florist so that he could buy corsages for his dates.
Sherman, now 88, considered himself fortunate to be at Ole Miss, and with all the benefits associated with his jobs, he thought he was living high for the times.
His only child, Elizabeth “Betsy” Sherman Shelton of McComb, has established the Prescott Alden Sherman Leadership Council Scholarship Endowment in honor of her father and to memorialize her mother, Elizabeth “Betty” West, with a $100,000 gift. The new scholarship endowment has been recognized by the University Foundation with a ceremonial planting of a rose bush in the Ole Miss Women’s Council for Philanthropy Rose Garden.
“My mother and father loved Ole Miss,” says Shelton. “I endowed this scholarship in thankfulness to God for my parents. Just before she died, my mother said that Ole Miss was like heaven on earth to her. She couldn’t remember any place in her life she had ever been that she loved more.”
Prescott Sherman was honored for lifetime achievements by Chancellor Robert Khayat as the 2003 Engineer of Distinction, the highest honor bestowed by the School of Engineering.
“Mr. Sherman is among those who magically make others’ dreams come true—who create everyday wonders with vision, expertise and leadership,” says Khayat.
“By endowing this scholarship, Elizabeth Shelton also will magically make others’ dreams come true,” says Sandra McGuire Guest, director of University Advancement. “The Sherman scholars’ dreams will come true because of the generosity of this family. The scholarship is a testimony to their vision and leadership in Pike County. Elizabeth Shelton pays a wonderful tribute to her parents by putting her faith in Ole Miss.”
Last year, Sherman contributed $2 million to the School of Engineering Endowment, supporting student scholarships and faculty development, as well as strengthening career service activities and industrial ties. His gift was set up to honor the lives of Sherman’s family members, including his father and brothers. All five sons grew up on the family farm and graduated from Ole Miss, but Prescott Sherman — a 1938 civil engineering graduate — was the only one who returned to McComb.
Sherman began work with a New York-based architectural and engineering firm. World War II and a stint in the U.S. Army interrupted his career, but he returned to his hometown in 1946 and formed Sherman Construction Co. Later he established PASCO Realty and Development Corp. and developed his family farm of 75 acres into a commercial and retail hub.
“My father’s philosophy for success is that as God gave him a vision, he sought to put together a team of people who, by working together, could make that vision a reality. He sincerely valued each and every person who worked for Sherman Construction Company,” says Shelton.
Students from Pike County will be given first preference for the scholarships, and recipients will be chosen based on leadership potential, character and financial need. The scholarship is available for any field of study, and recipients are to participate in a leadership development and mentoring program along with their academic pursuits.
The scholarship commemorates Sherman’s retirement.
“It has been a pleasure to spend the majority of my working years in my hometown,” he says. I want to thank the local people for their help and support throughout my years in business.”