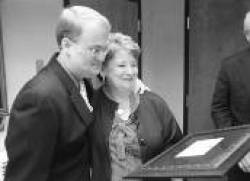 UM senior Scott Walker presents his friend and mentor, Sue Hodge, academic counselor for the School of Business Administration, with a scholarship named in her honor.

Senior Scott Walker considered Sue Hodge a friend and mentor. As an academic counselor for the School of Business Administration, she not only guided the Ocean Springs native through the logistics of choosing the best classes and schedule but also took time to inquire about his personal life.

Walker didn’t forget Hodge’s many acts of kindness. When he heard about the Ole Miss Women’s Council for Philanthropy scholarship program, which includes mentoring for its scholars, he knew he had found a way to honor her for helping him grow.

He recently created the Sue Hodge Women’s Council Scholarship for students in business. How is Walker, who won’t graduate until December, able to afford such an endowment? The managerial finance major’s $100,000 gift was deferred through an Ole Miss giving program. Students buy a life insurance policy with small monthly payments, making the UM Foundation the owner and beneficiary, and proceeds go to the University.

“I don’t know when I would have been able to give that much money to Ole Miss, but this (the student life insurance program) is a good way to do it now,” Walker said.

Hodge actually came into Walker’s life by design. He had heard of the academic counselor’s kindness through older friends and University recruiters. Upon arriving on campus, he sought her out.

“I don’t really think I was supposed to go to her, but she welcomed me anyway,” Walker said.

The pair formed a bond. When Walker lost his bid for Associated Student Body (ASB) president in a runoff last year, Hodge was there for him. When Walker realized he needed an additional semester to complete degree requirements, Hodge came through again.

“She made me realize it was only an extra football season,” he said. “She is a close friend and is always supportive.”

Hodge learned about the scholarship in a presentation by Chancellor Robert Khayat of a plaque embossed with her name. It will be placed by a rosebush in a special garden on the Oxford campus. Each $100,000 gift to the Women’s Council will be represented in the garden.

The scholarship in Hodge’s name couldn’t have come at a more opportune time. Her husband, the late Eldrid Hodge, was gravely ill when she learned of the gift. He died just a few days later.

“It was divine intervention” Hodge said. “God has his hand in everything that happens. My husband was so proud. After we learned of the scholarship, it was like he knew he didn’t have to worry about me any more. He knew there would be people who care around me, and I could draw strength from good things
happening.”

Walker said he will always remember the moment his mentor received news of the scholarship.

“I have never felt better about anything I have done in my life,” he said. “It is the most self-rewarding feeling knowing you are helping someone.”